At a briefing held at UN Headquarters in New York, UN Watch this week published a new report, Dawn of A New Era?, assessing the UN Human Rights Council and its year of reform.

Has the council met former Secretary-General Annan’s benchmarks for reform, eschewing the politicization and selectivity that so discredited its predecessor, the Commission on Human Rights, and electing members with solid records of human rights commitment?

Sadly, according to the detailed 44-page report, the answer is no. Council members are supposed to be elected based on their human rights records, yet the 47-nation body includes China, Cuba, Saudi Arabia and other persistent violators. In upcoming elections next week (see below) it is expected to include even more.  The council is supposed to objectively and non-selectively protect human rights worldwide, yet has been paralyzed by its obsessive focus on Israel, the only country it has condemned, while ignoring the world’s worst abuses, in Burma, Libya, Zimbabwe and elsewhere.  It is supposed to strengthen the UN’s human rights mechanisms, yet it now threatens to erode the system and eliminate many of the independent investigators of abuses.

Features in the report:

The report was presented at a luncheon at the UN co-sponsored by UN Watch and Freedom House, another human rights NGO, and was attended by diplomats, UN officials, academics, human rights activists and journalists.  Read the full report. 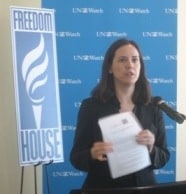 At the same event, UN Watch and Freedom House issued a joint assessment of the 15 candidates running for council seats in the election to be held next week. Each candidate was evaluated for its record of human rights protection at home, and for its voting record on human rights promotion at the UN.  Denmark, Italy, the Netherlands, and Slovenia were found to be well qualified for council membership. Angola, Belarus, Egypt, and Qatar are not qualified. Candidates with questionable qualifications are Bolivia, India, Indonesia, Madagascar, Nicaragua, the Philippines, and South Africa. Read the full joint assessment.