Photo Timeline: “How the Human Right Council Was Born”

By a vote of 165 to 7, a UN General Assembly committee last Friday approved “institution-building” changes to the Human Rights Council that actually weaken or eliminate several of its key institutions. The package scraps the independent investigators of abuses in Cuba and Belarus, makes it harder to criticize specific countries for violations, and institutes the permanent censure of Israel as a fixed agenda item, an initiative pushed by the group of Islamic states. 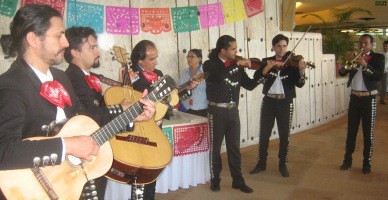 Zeal for the deal

June 18, 6:00 pm —  Mariachi band performs outside plenary chamber at victory party arranged by council president Luis Alfonso De Alba of Mexico, which turned out to be premature. After one song they were told to stop—there was no agreement to toast.  The grand, Mexican-themed celebration included tequilas and tacos, Mexican beer and guacamole. Foreign Minister Patricia Espinosa was brought all the way from Mexico City to be there for the win. Winning at all costs, however, led to the trespass of basic human rights principles and legal procedures. (Click for full timeline)

The U.S., Canada, Australia, Israel and three Pacific Island states voted in opposition. The European Union countries supported the package, arguing it was the best possible compromise to preserve a functioning council.

The changes were first adopted on June 19, 2007 by the Human Rights Council in Geneva under dubious circumstances. As documented by a UN Watch photo timeline, “How the Human Rights Council Was Born” —an eye-opener into the dark side of international law and diplomacy—the package was rammed through in middle of the night, with Canada denied its right to vote. The council then proclaimed that it was unanimously approved, with vice-president Dayan Jayathilake of Sri Lanka saying, “there is a consensus that there was a consensus.” As shown in the timeline, UN documents were then doctored to hide the irregularities. Although the U.S., Canada, and Poland filed official objections in July, the outright revision of history was ignored by UN officials.

During last week’s debate, Canadian officials recalled how the chair in June had used “procedural manoeuvring” to sideline Canadian delegates as they sought to call a vote at that time on the package. “We categorically reject the manner in which the … package was pushed through at the council,” said Henri-Paul Normandin, Canada’s deputy representative at the UN. “Canada was denied its sovereign right to call a vote … (and) in using the ends to justify the means, the human rights council set a very dubious precedent.” Zalmay Khalilzad, the U.S. ambassador to the UN, said a national election conducted in the same way the council sidelined Canada would be declared “unfree and unfair.” 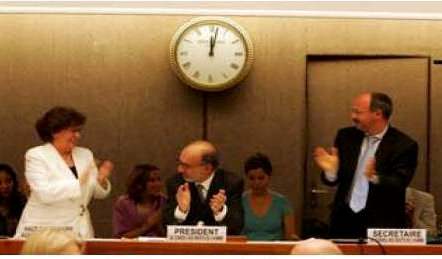 Geneva’s Patek Philippe clocks
don’t lie. As for the UN…

June 19, 12:02 am —  Photo evidence reveals that council president Luis Alfonso de Alba’s announcement occurred past—and not before—the legal midnight deadline of June 18. However, official UN records were later fixed to read “11:55 pm” on “June 18.” UN High Commissioner for Human Rights Louise Arbour, left, joins the applause. President De Alba announced an “agreement” even though Canada never agreed. A promised formal adoption of the package never took place. The majority of the council, however, decided to simply pretend that it did. (Click for timeline)

In a campaign led by UN Watch, some 30 NGOs from around the globe urged General Assembly members to excise the regressive measures. However, Western states claimed that opening the package would jeopardize the mechanisms of the council that work.

How much actually works in this new era—with a council almost entirely dominated by the agenda of repressive regimes—is questionable. The backsliding of the past year has no precedent. The democracies are outnumbered, on the defensive, and losing badly.

The new changes of the package include the following:

There was, however, a rare glimmer of light this week, when a General Assembly committee—the same one that approved the above package—managed to rebuke some of the world’s worst human rights abusers. A resolution on North Korean violations passed by 97-23, with 60 abstentions. Another resolution strongly condemned violence against peaceful demonstrators in Burma, now known as Myanmar, with a vote of 88-24, with 66 abstentions. A third vote expressing deep concern at rights violations in Iran passed by 72-50, with 55 abstentions.

What this means, ironically, is that while support for meaningful human rights action can still be found in some UN bodies, the 47-nation Human Rights Council is not one of them.