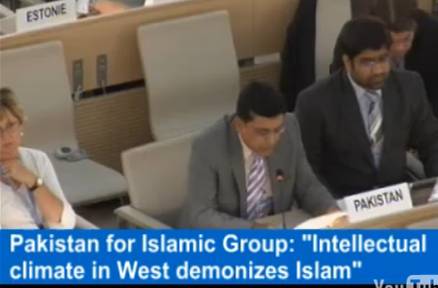 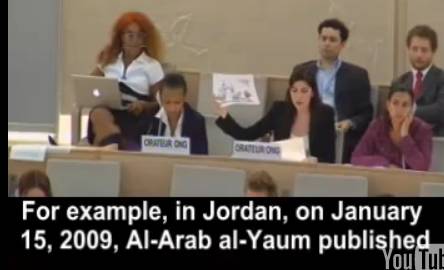 Pakistan for the Islamic Group:  The intellectual climate in the West is increasingly marked by a disturbing tendency to demonize Islam… Muslims are being demonized and dehumanized as Jews were in the inter-war period of the last century…

Qatar: The sufferings of Arab and Muslim communities in Western countries in terms of discrimination…

Libya: Israel’s occupation of Palestine and the other occupied Arab territories is based on racism…  The phenomenon of racial discrimination and incitement to hatred against Muslims through attempts to distort the picture of Islam through relating it to terrorism…   Making insults against the Holy Prophet in the media, particularly in certain Western European countries…

Pakistan for the Islamic Group:  Contemporary manifestations of racism prevail in different parts of the world — in particular in Western societies…

Sudan for the Arab Group: Islamophobia in countries of the North…  The racist practices of Israel, the occupying force in the Occupied Palestinian Territories, is one of the worst forms of racism…

UN Watch Responds: Mr Rapporteur, this Council recently adopted yet another resolution expressing its deep concern about serious instances of deliberate media stereotyping of religions, their adherents, and sacred persons.

Your report calls for an end to such media stereotyping and incitement to hatred.

During your work, have you ever noticed that the countries that are the most egregious practitioners of this stereotyping, in the form of caricatures, are those who sponsor and support these UN resolutions?

In particular, have you ever noticed that state-controlled newspapers in the Middle East regularly publish the most repugnant anti-Semitic cartoons?

Depictions of Jews as bloodthirsty are commonplace. For example, in Jordan, on January 15, 2009, Al-Arab al-Yaum published a cartoon of a hunch-backed and hook-nosed Jew, drinking Palestinian blood.

Other images promote the notion of a Jewish conspiracy. In 2008, Syria’s Al-Watan published a cartoon of a religious Jew holding puppets of U.S. presidential candidates McCain and Obama.

Jews are regularly depicted as bloodthirsty murderers. In Qatar, on June 2, 2010, Al-Watan published a caricature of a Jew who is half-man and half-octopus, wielding a weapon and an axe dripping with blood.

One could also cite dozens of caricatures portraying Jews stealing organs of Palestinians, such as this one published in Oman, on August 20, 2009, in Al-Watan.

All of these caricatures are reminiscent of the Nazi area, and depict religious Jews in classic stereotypes: long beards, black hats and coats, all of which target the Jewish religion and its adherents.

Mr. Rapporteur, in your investigation of intolerance and religious hatred, we call upon you to examine first — as logic would require — the countries that sponsor these resolutions.

(The UN Watch intervention was delivered by Lisa Levy.)