GENEVA, Oct. 25– Richard Falk, the U.N. Human Rights Council’s permanent investigator of “Israel’s violations of the bases and principles of international law,” arrived today at the General Assembly to present a new report calling for people to “boycott, divest and sanction” HP, Motorola, Volvo, Caterpillar, and other companies having commercial activities with Israelis living in the West Bank. For his full report,click here; for his press release threatening criminal prosecution of employees of such corporations,click here.

The following press release was sent by UN Watch today
to its list of more than 5,000 journalists worldwide. 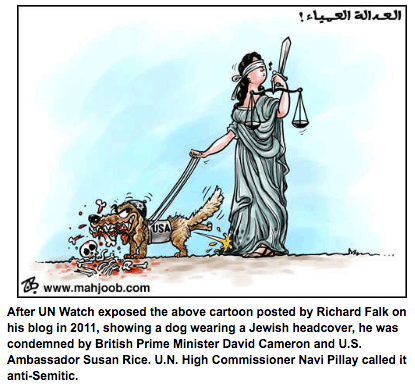 GENEVA, Oct. 25 —UN Watch, a non-governmental Geneva-based monitoring group, commended the British government for protesting to the U.N. over “anti-Semitic” remarks made by one of its top officials, and urged the U.S., France, Germany and other democracies to do the same today during the U.N. General Assembly’s annual debate with Richard Falk, the Human Rights Council’s Special Rapporteur mandated to investigate “Israel’s violations of the bases and principles of international law.”

Falk had collectively accused “the organized Jewish community” of responsibility for war crimes, andprovided the cover endorsement of a virulently anti-Semitic book, “The Wandering Who,” which has been condemned as racist byElectronic Intifadafounder Ali Abunimah and other Arab activists.

In a firm UK demarche delivered at a meeting with the senior leadership of the U.N. Office of the High Commissioner for Human Rights, representatives of the British Foreign Office expressed London’s “serious concerns” over “unacceptable” statements made by Mr. Falk.

These were first outlined by UN Watch in anappealsent this summer to Prime Minister David Cameron, who hadcommittedto closely watch Falk’s actions and comments after the latter posted an anti-Semitic cartoon(right)in 2011. Concerns were also raised with the British Government by UK Jewish institutions through the Jewish Leadership Council.

“For the U.N. human rights system to be credible in the fight against racism, its own high representatives must not be allowed to incite hatred and racial discrimination with impunity,” said UN Watch executive director Hillel Neuer.

“If anti-Islamic acts by completely marginal and unknown figures merit a chorus of sharp and prompt condemnation by world figures, high U.N. officials, and diplomats,” asked Neuer, “should not anti-Jewish acts by a U.N. mandate-holder—who speaks on human rights from the world body’s podium and with its imprimatur—merit the same, and so much more?”

With Mr. Falk’s endorsement on the front cover, the author boasts about drawing “insights from a man who . . . was an anti-Semite as well as a radical misogynist,” and a hater of “almost everything that fails to be Aryan masculinity” (p. 89-90). He declares himself a “proud, self-hating Jew” (p. 54), writes with “contempt” of “the Jew in me” (p. 94), and describes himself as “a strong opponent of … Jewish-ness” (p. 186).Harvard law school professor Alan Dershowitz wrote inThe New Republicthatthe author’s writings, both online and in his new book, “brim with classic anti-Semitic motifs that are borrowed from Nazi publications.”

“Because Falk answers only to the U.N. member states, we call on America, as a leading member and supporter of the Human Rights Council, to assume its responsibility and speak out against Falk’s racism, as Britain has done.”