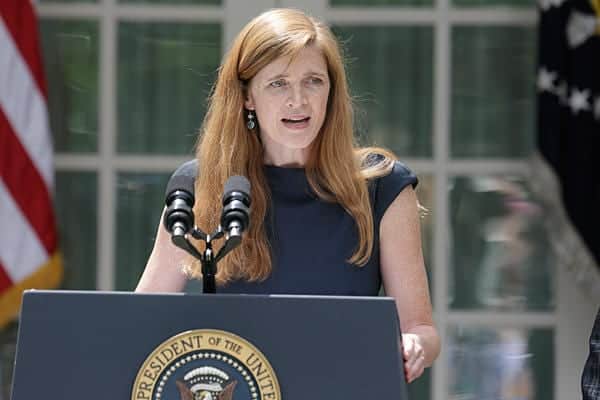 Good News: Newly-appointed U.S. Ambassador to the United Nations Samantha Power announced to UN Watch that she opposes the election ofSwitzerland’s nominee for the UN Human Rights Council, saying he is “unfit” for the job. Jean Ziegler, founder of the “Moammar Qaddafi Human Rights Prize,” is also being challenged by numerous Swiss MPs. Click here for full story by UN Watch. To take action and help UN Watch fight Ziegler’s nomination, click here.
___________________________
Today UN Watch board member Irwin Cotler published the following JerusalemPost op-ed to greet Ban Ki-moon as he began his Israel visit.
Israel and the United Nations
Before UN human rights chief Sergio de Mello was killed in Iraq in 2003, he spoke to me about his advocacy for Israel’s inclusion in the Western group. Mr. Ban should announce that he will continue this mission.
By Irwin Cotler
August 15, 2013
In Jerusalem on Friday, the secretary- general of the United Nations – whose agencies often apply differential and discriminatory treatment toward Israel – will hold top-level meetings with the president, prime minister, senior cabinet members and parliamentarians.
Yet Ban Ki-moon’s most significant encounter may come on Friday evening with a group of Israeli students, participants in Rishon Lezion College of Management’s Model UN program.
Several such societies have sprung up recently at Israeli universities and colleges, testament – as the UN chief will see himself – to the expanding intellectual curiosity and motivation of bright young Israelis to learn about, engage with, and perhaps one day work for the preeminent world body.
The secretary-general should take away the message that, despite all the selectivity, calumny and hostility thrown their way, a broad consensus of Israelis, and Jews the world over – as I have appreciated – still hope to build bridges with the UN. But they must feel, as former UN chief Kofi Annan once said, “that the United Nations is their home, too.”
While Ban cannot control the actions of member states, he does have the power to give moral leadership and direction. Words matter.
In his public speeches on Friday, he should condemn the systematic bias perpetrated against the Jewish state by numerous UN agencies, in gross violation of the UN Charter’s guarantee of equal treatment to all nations large and small.
Mr. Ban should acknowledge that the UN Human Rights Council, meant to embody the organization’s highest principles, is a case study of such bigotry. Examples abound.
First, the council has a standing agenda item against Israel, the only country specifically targeted at every meeting. Not even major abusers like China, Sudan or Syria are subjected to such treatment. Mr. Ban voiced his disapproval after the item’s adoption in 2007, but has stayed silent ever since.
Second, the council adopts more resolutions condemning Israel than it does on the rest of the world combined.
In its March session, there were six one-sided resolutions against Israel – and only four on all other countries. The vast majority of the world’s victims of gross and systematic violations – from China to Saudi Arabia, Cuba to Zimbabwe – failed to merit a single resolution.
Third, Israel is the object of more emergency sessions than any other country in the world, even as the council turns a blind eye to mass killings in Iran, Egypt and elsewhere, a clear denial of international due process. One product of these sessions was the 2009 Goldstone Report, which excoriated Israel and exonerated Hamas.
Fourth, Israel is the only country to be excluded from the council’s regional group system. Annan criticized this “long-standing anomaly,” which prevents Israel from participating fully in the work of the organization. Sir Robert Jennings, former president of the International Court of Justice, said it “places the UN in breach of its fundamental obligations regarding sovereign equality and is thus illegal.”
Finally, while many of the council’s country investigators and experts do important work, when it comes to Israel, politicization reigns.
Richard Falk, investigator on the Palestinian territories – mandated by the council to focus only on Israel’s actions, which are presumed in advance to be violations of international law – is so extreme in his support for the Hamas terrorist organization that even the Palestinian Authority asked him to resign.
And just this week it emerged that Jean Ziegler – a recently retired council expert who justified Hezbollah attacks on Israel while supporting Muammar Gaddafi and other dictators – is set to return.
One important caveat must be made: None of this is intended to suggest or infer that Israel is above the law or is not responsible for violations of international human rights and humanitarian law.
On the contrary, Israel, like any other state, must be held responsible for any violations. It is not that Israel seeks to be above the law, but that Israel is systematically denied equality before the law in the international arena; it is not that human rights standards must not be applied to Israel, but that they must apply equally.
Last year, after the council announced yet another one-sided inquiry, Israel severed its ties with the council. Discussions are under way to bring it back.
Ardent skeptics might be happy for Israel to stay away, but many Israelis support Israel’s full participation in permanent UN bodies, and would support a decision to return – provided the council shows some signs of change.
The secretary-general can help by addressing two areas.
Before UN human rights chief Sergio de Mello was killed in Iraq in 2003, he spoke to me about his advocacy for Israel’s inclusion in the Western group. Mr. Ban should announce on Friday that he will continue this mission, and call also for the removal of the biased agenda item.
If so, the idealistic students who meet the secretary-general on Friday evening will have seen that the principles taught in model UN are upheld by those who lead the real UN.
The author is a Canadian MP, emeritus professor of law at McGill University, and former minister of justice and attorney-general. He serves on the board of UN Watch, a human rights NGO.