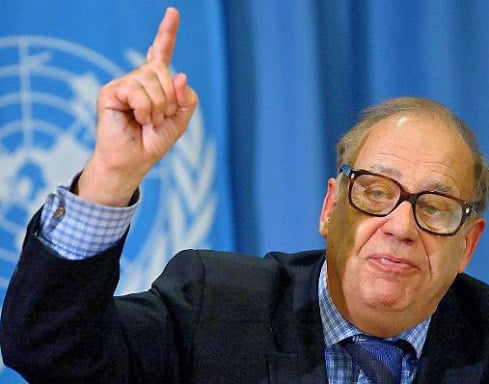 Above: UNHRC expert Jean Ziegler advocates “hatred of the West.”

We are alarmed that as U.N Secretary-General António Guterres tomorrow opens the 2017 session of the Human Rights Council, that body will be honoring its advisory committee member Jean Ziegler—a notorious anti-American ideologue who has accused the U.S. of committing “genocide” in Cuba, supported the terrorist group Hezbollah, and is the co-founder and 2002 recipient of the Muammar Qaddafi Human Rights Prize—as one of its high-level speakers, together with High Commissioner for Human Rights Zeid Ra’ad Al Hussein and UNDP chief Helen Clark.

Moreover, two weeks later, Mr. Eric Tistounet, Head of the Human Rights Council branch of the U.N. Office of the High Commissioner for Human Rights (OHCHR), will be speaking together with Mr. Ziegler at the Geneva screening of a film “Jean Ziegler: Optimism of the Will,” the publicity for which heaps praise upon Ziegler as a great “intellectual.”

We urge you to speak out and condemn the U.N.’s obscene celebration of this apologist for brutal dictators and terrorists—and to try to stop it. The United States gives some $40 million to OHCHR in regular budget and voluntary funds, and yet it seems this office seeks to insult the U.S. by honoring a leading anti-American figure.

Both of these events supported by the U.N. are designed to obscure Mr. Ziegler’s shameful record, which includes:

For these reasons and more, Mr. Ziegler has been condemned by leading authorities:

Ambassador Haley, you have spoken firmly against the U.N.’s abuse of its own founding principles.

Mr. Ziegler’s 17-year career as a U.N. Human Rights Council “expert” has been dedicated to supporting tyrannies and terrorists, and embodies the debased values of a distinct political culture.

Accordingly, we urge you to intervene against the elevation of Mr. Ziegler by the Human Rights Council with the complicity of the Office of the High Commissioner.