Until video evidence emerged in 2013, U.N. Human Rights Council official Jean Ziegler lied on repeated occasions—over seven years—about his ties to the Muammar Qaddafi Human Rights Prize. (See UN Watch’s original 2006 exposé here.)
Ziegler’s denials were astounding because it was he who announced the prize to the world in 1989—quoted by Time magazine and numerous other newspapers and magazines—and because Ziegler himself received the prize at a ceremony in Tripoli, Libya, on the evening of 29 September 2002.
Ziegler was an original founder of the prize, and also played a leading role in “North South XXI,” the Geneva-based front group that managed the prize and promoted Libyan propaganda at the UN. Below are several examples of Mr. Ziegler lying about the prize.
It is telling that in Ziegler’s 2006 and 2013 denials about receiving the prize, he shows remarkable knowledge about the precise amount of the prize award—$100,000—raising the question of whether he will ever return the money he received to the Libyan people. Ziegler’s taking of the money violated UN ethics rules (see note 46 at page 10 here).

Jean Ziegler Lied to Le Temps, 2 October 2002 – Jean Ziegler refuse le «prix Kadhafi des droits de l’homme»
Ziegler told a Geneva newspaper that he refused the prize because of his UN position, and because he never accepts prizes and wasn’t about to start now. The newspaper estimated Jean Ziegler’s potential share of the Qaddafi Award prize money at 100,000 Swiss Francs.
Jean Ziegler Lied to Swiss TV’s 10vor10 Program – 2011
Ziegler: “I have never played a role in the [Qaddafi} Human Rights Prize. Period.” However, Swiss TV already in 2011, based on documents exposed by UN Watch in its 2006 report, exposed Ziegler as obviously lying.

Jean Ziegler Lies at UN Press Conference, October 2006
Ziegler: “How could I create… I’m a university professor, I don’t have $100,000 to spare for some crazy prize…  It’s absolutely absurd!”
Jean Ziegler Lies in Sept. 2013, Free Beacon Interview, Part 1
Q – “So you were never involved with the Qaddafi Prize?”
Ziegler – “No… How could I be a founder of a prize, of I don’t know, 100,000 dollars? And secondly, I have never gotten this prize….  It’s totally, completely absurd…”

Jean Ziegler Lies in Sept. 2013, Interview with Free Beacon – Part 2
Ziegler: “I can only tell you I didn’t get it. And if I would have gotten it, I would not have accepted it.”
Q – “Were you at the conference where the prize was awarded, were you at the meeting where it was awarded in 2002?”
Ziegler: “No. No.”

Numerous media reports from the late 1980s cite Ziegler as a representative for the prize committee, including UPI, Time magazine and the Independent. But Ziegler claimed the reports were mistaken in an interview with the Free Beacon. He said the allegations were part of a “disinformation campaign” by U.N. Watch, a prominent Geneva-based organizations that monitors human rights issues at the U.N…
“How could I be a representative [for the Qaddafi prize]?” he added. “It’s absurd. It’s totally and completely absurd.”
Ziegler was quoted in UPI in 1989 as saying the prize was “conceived as an anti-Nobel Peace Prize award for the Third World.” He also told the publication that the prize foundation had raised $10 million in capital, according to the report.
Time magazine listed him as a member of the jury that awarded the prize.
“That is a wrong quotation,” Ziegler told the Free Beacon. He declined to say whether he had spoken to any of the publications for the articles.
When asked why these outlets allegedly misquoted him speaking about an organization that he had no involvement with, Ziegler said he did not know.
“I mean, you must ask the journalists. There [is] a lot of wrong information going around,” he said. 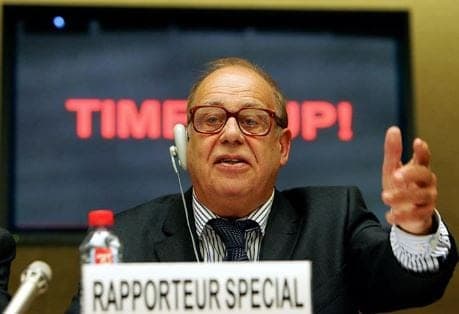