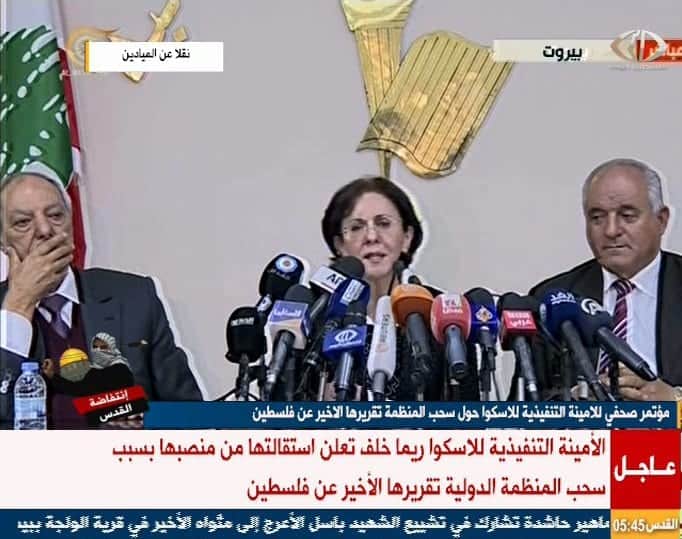 GENEVA, March 17, 2017 – UN Watch welcomed today’s resignation by Rima Khalaf from her post as head of a Beirut-based UN agency, comprised of 18 Arab states, after what she described as pressure from secretary-general Antonió Guterres to withdraw a report accusing Israel of “apartheid.” The report appears to have been deleted today from the U.N. ESCWA agency’s website.
As revealed by UN Watch, the author of the report was disgraced ex-UN official Richard Falk, who had been denounced on repeated occasions by former UN chief Ban Ki-moon and other world leaders for espousing 9/11 conspiracy theories, blaming the U.S. and Israel for the Boston Marathon bombing, and spreading antisemitism.
A video exposing Falk was released today by UN Watch. It was shared widely on Facebook and Twitter, increasing pressure on the United Nations to act.
UN Watch called on the British government to consider whether under law Richard Falk should be expelled from the UK, where he is now lecturing, on account of his having been denounced three times by the UK government for racism.

Earlier this week, U.S. ambassador Nikki Haley welcomed remarks by Guterres’ spokesman distancing himself from the report, but she demanded that the UN “withdraw the report altogether.”
“Guterres deserves credit for doing the right thing,” said UN Watch executive director Hillel Neuer.
“But there is no question that the initial moral voice here was that of U.S. ambassador Nikki Haley, and that it was U.S. leverage which prompted the UN to act.”
UN Watch Blasts Human Rights Council For Ignoring World’s Worst Abuses

After North Korea, Venezuela, China, Syria, Iran and Russia congratulated themselves while attacking the U.S., Britain, Canada, Holland and Israel, UN Watch executive director Hillel Neuer was given 90 seconds to take the floor at the UN Human Rights Council and set the record straight:

“Mr. President, let the record show that everything we just heard from some of the world’s worst human rights abusers has no basis in law or in fact. When will this council live up to its own Charter and address the real human rights abuses taking place in the following regions:

UN Watch’s recent 9th Geneva Summit for Human Rights gave dissidents a global platform through reports that appeared in media agencies around the world. UN Watch is deeply grateful to Voxia Communication, a Swiss public relations firm, for its instrumental support.
The Guardian: “In an age of autocracy, meet the dissidents speaking truth to power”
Strongmen are back in vogue, but these six people are determined to defy the despots.
The Independent: “UK accused of ‘blatant double standard’ over arms sales to Saudi Arabia”
James Jones, a British filmmaker who exposed the Gulf state’s human rights abuses in his documentary Saudi Arabia Uncovered, said Britain remains “closer than ever” to its ally despite a litany of human rights abuses… He spoke on the issue at the Geneva Summit for Human Rights and Democracy, held at the start of the UN Human Rights Council session at Switzerland’s Palais des Nations.
Bild: “Wie Diktatoren den Menschenrechts-Rat zerstören”
“How dictators destroy the UN Human Rights Council”
Representatives of the most brutal regimes in the world will meet from Monday in Geneva—for the next session of the UN Human Rights Council. Among current member states: Saudi Arabia, Cuba, Venezuela, China.
RTS (Swiss TV): “la jeune femme de 20 ans témoigne de l’horreur de Daech”
“Shirin: the young 20-year-old woman testifies on the horrors of ISIS”
This young woman was kidnapped and sold to several people before fleeing her condition as a sex slave.
(TV news broadcast – in French)
Al Jazeera: Interview with Hillel Neuer
Mr. Neuer spoke about how the Geneva Summit took place on the eve of the U.N. Human Rights Council opening its annual session. While abusers like China, Cuba, and Saudi Arabia were elected, we were giving a global platform to their victims, and to courageous activists who were persecuted in Iran, Mauritania and Venezuela. We urged the U.N. to take action to protect the victims—like Raif Badawi, the jailed Saudi human rights hero.
France24 English: “Turkey is the biggest jail for journalists in the world”
Dündar has become a symbol of the crackdown on the press in Turkey under President Recep Tayyip Erdogan. He spoke to FRANCE 24 from Geneva about the state of press freedom in his home country.
Deutsche Welle (Spanish): “Cumbre de Derechos Humanos en Ginebra”
“Human Rights Summit in Geneva”
Activists, journalists and politicians want to alert the international community to human rights abuses. In that forum, our special envoy, Nocole Frölich, interviewed Antonietta Ledezma, daughter of the Venezuelan mayor imprisoned for two years.
BBC Vietnam: “Dang Xuan Dieu speech on human rights in Geneva”
Mr. Dang told the BBC from Switzerland: “This is the first time I’ve had the opportunity to speak before an important conference. I do this while my health is still not recovered after many years in prison. However, what the conference needs is my presence as a direct victim of bone, flesh and experiences on the status of human rights violations in Vietnam.”
Tribune de Genève: «L’Arabie saoudite, c’est Daech avec du pétrole!»
“Saudi Arabia is Daesh with oil!”
Shocking Documentary: Filmed with a hidden camera, James Jones’ documentary reveals the secrets of the Kingdom withheld from the West. He is interviewed in Geneva.
Tribune de Genève: Une esclave sexuelle Yézidie honorée à Genève
“Yazidi sex slave honored in Geneva”
Shirin, a representative of the Yazidi minority in Iraq, will receive a women’s rights award presented by 25 NGOs in Geneva. She was sold as a sex slave at the age of 17 and raped by nine jihadis of the Islamic State.
Radio France Internationale: Antonietta Ledezma: “En Venezuela sólo los demócratas van a la cárcel”
“Antonietta Ledezma: In Venezuela only the Democrats go to prison”
RFI spoke with Antonietta Ledezma after appearing in front of an international forum and United Nations authorities. The young activist spoke about the health of her father and the harassment of the regime of Nicholas Maduro to his family whenever they travel abroad.
El Nacional (From EFE): Antonietta Ledezma: “Lucho por mi padre y por rescatar a mi país”
“Antonietta Ledezma: I fight for my father and for the rescue of my country”
“My struggle is not only for my father, but for all the political prisoners in Venezuela, because I do not want more daughters, more mothers and more parents to go through what I and my family have gone through and keep going through, and what so many families In Venezuela are experiencing,” said Ledezma in an interview at the Geneva Summit for Human Rights and Democracy.
READ MORE