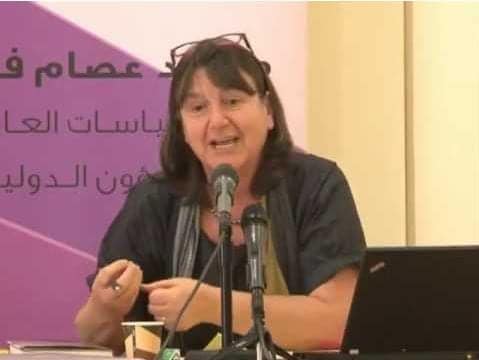 Hilal Elver, co-director with her husband Richard Falk of a
research institute  at UCSB, is slated to win a top UN post on Thursday.

GENEVA, May 6, 2014 — U.S. Ambassador Samantha Power must speak out now to stop a controversial Turkish lawyer — the wife and employee of discredited UN official Richard Falk — from winning a top U.N. human rights post this Thursday, said UN Watch in a letter that was also sent to ambassadors from Austria, the Czech Republic, Estonia, France, Germany, Ireland, Italy, Japan, Romania and the UK, all of whom are voting members on the 47-nation UN Human Rights Council (UNHRC), and to Canada, an observer.
The Geneva-based advocacy group expressed serious concerns about the nomination of Hilal Elver, a former Turkish government adviser, for the position of UN Special Rapporteur on the right to food, to be decided in Geneva on Thursday.
The UN position was initiated in 2000 by Cuba, and held for eight years by Jean Ziegler, founder and recipient of the Muammar Qaddafi Human Rights Prize.
“I don’t know why the U.S. is refusing to speak out. The appointment of Falk’s wife for a 6-year term on the same day that his own term ends is crass nepotism,” said UN Watch executive director Hillel Neuer, “in flagrant breach of council rules. And she is completely unfit to serve.”
In her application form, Elver gave self-disqualifying answers, stating that she was in violation of the council’s conflict-of-interest prohibition. Her responses are replete with spelling mistakes and non-sequiturs.
Elver is the co-author of many articles with Falk — who was condemned last year by UN chief Ban Ki-moon — and has joined her husband on numerous occasions in supporting the work of 9/11 conspiracy theorists, and in accusing the West and Israel of Islamophobia and “genocide.”
“Hilal Elver is not only Richard Falk’s wife, employee and main collaborator, but she echoes his crude and simplistic post-colonial narrative, which demonizes America, the West, and Israel, while praising dictators like Erdogan and the books of 9/11 conspiracy theorists,” said Neuer.
In its letter to Power, UN Watch summarized her failure to satisfy the job’s minimum requirements, as Neuer did in an article here.
According to UN Watch, thousands have signed an online campaign appealing for the U.S. government to take action.

Dear Ambassador Power,
UN Watch is deeply concerned over the proposed UN Human Rights Council appointment, scheduled for this Thursday, 8 May 2014, of Ms. Hilal Elver as the new Special Rapporteur on the Right to Food. For the reasons set forth below, UN Watch urges the United States to oppose her candidacy, which we believe will harm the cause of human rights, damage the reputation of the United Nations, and undermine the interests of the United States.
As you know, the Right to Food mandate was conceived by Cuba in 2000 to be used as a political weapon against the U.S. and West, which is exactly what the first mandate-holder— Jean Ziegler, co-founder of the Muammar Gaddafi Human Rights Prize—did for eight years. A review of Ms. Elver’s record suggests that she would follow this politicized and prejudiced path.
Under Article 39 of the Annex to Human Rights Council Resolution 5/1, the criteria for mandate-holders include: (a) expertise; (b) experience in the field of the mandate; (c) independence; (d) impartiality; (e) personal integrity; and (f) objectivity.
Ms. Elver clearly fails to meet these criteria. We note the following:

For all of these reasons, UN Watch urges the United States, as a leading member of the Human Rights Council, to uphold that body’s rules and founding principles by opposing the unfit candidacy of Ms. Elver.
Sincerely,
Hillel C. Neuer
Executive Director