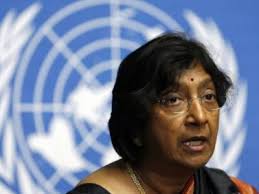 “Because High Commissioner Pillay is the U.N.’s highest authority on human rights, her presence in Oslo would send a powerful signal that the systematic violation of basic rights suffered by 1.3 billion citizens of China-one sixth of the world’s population-is not forgotten by the world. Beijing’s powerful U.N. influence should never justify silence or reticence by the world body’s highest officials,” said Hillel Neuer, an international lawyer and executive director of UN Watch, a non-governmental organization in Geneva that monitors the world body’s human rights system.

In the two years since her appointment in September 2008 as UN High Commissioner for Human Rights, Ms. Pillay has only referenced China in three statements, including one in 2009 that dealt with Mr. Liu, said UN Watch. During the same period, Pillay criticized the United States in seven statements, including a New York Times op-ed that accused the U.S. of having “eroded many of the most basic human rights guarantees of the modern era.”

Pillay’s office in Geneva insisted she could not attend the award ceremony because of a clash with a Geneva event for World Human Rights Day, reported AFP.

However, according to Neuer, “this is a minor event expected to yield minimal press coverage and world visibility, and she can be easily replaced by Deputy High Commissioner Kyung-wha Kang. By contrast, Ms. Pillay’s presence in Oslo would be noticed worldwide and send a powerful signal of accountability to the violators of human rights in China. I fear her planned absence may be sending a contrary signal of impunity. But it’s not too late, and we urge the High Commissioner to reverse her decision.”

China, COVID-19 & the WHO — Hillel Neuer on Sky News Australia