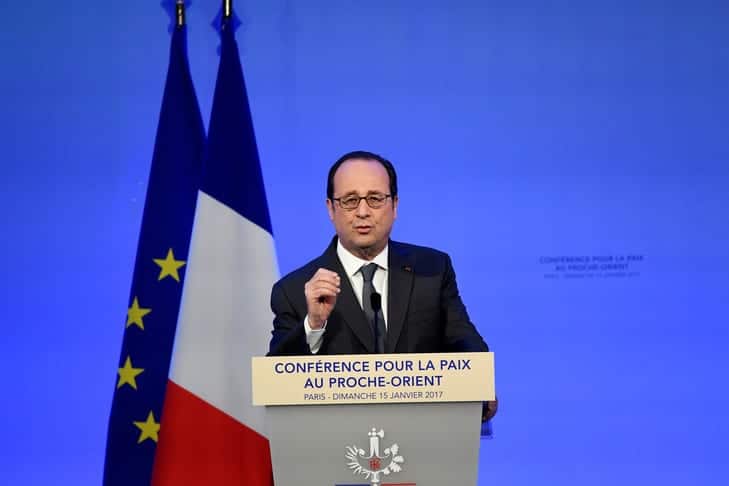 In your speech thjs afternoon, after you cited the wars in Syria, Iraq, and Yemen, and the struggle against the Islamic State, you sought to justify the focus of today’s Paris summit on the Israeli-Palestinian conflict by saying the Middle East cannot “regain its stability” unless we address “the oldest of its conflicts.”

Are you not aware that today’s Middle East wars in the name of Jihad, and internecine conflicts such as the Sunni-Shiite schism, are 1300 years older than the Arab-Israeli conflict?

Do you really believe that increased world focus on the Israeli-Palestinian issue will cause Syria—a country that has disintegrated from Bashar Assad’s genocidal bombings of his Sunni population, backed by Iran, Hezbollah, and Russia—to somehow “regain stability”?

Do you really believe that what Israel does or doesn’t do will affect the Islamic State’s genocidal massacre, abductions and rape of Yazidis and Christians in Iraq?

Do you believe it will affect the proxy war in Yemen between Wahhabist Saudi Arabia and Shiite Iran, in which Saudi-led airstrikes have killed more than 10,000 people?

Are you not really saying, in effect, that all of today’s Middle East wars—their death, destruction, and displacement of millions of refugees, many of whom are fleeing into Europe—can somehow be pinned on the Jewish state?

If not, then why did your country decide to call today’s event a “Middle East” peace conference—when, in fact, it was only about one of the region’s many conflicts (and, in the past six years, the least bloody and consequential of them all)?

In doing so, are you not echoing the U.N.’s frequent resort to euphemism, in its debates, reports, and web-pages, which claim broadly to address “the Middle East,” when in fact they focus only on actions by Israel?

France at UNESCO: more anti-Israel than Assad and Chavez