Jewish state to be targeted all day, in 7 biased reports 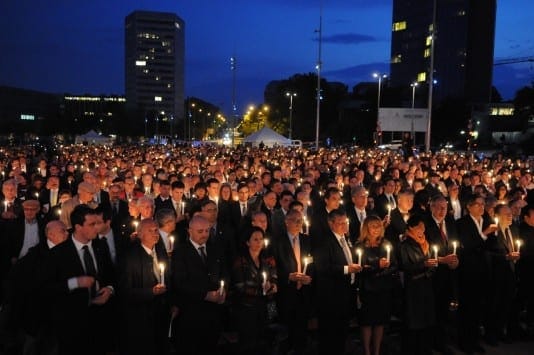 Above: The last UN Watch rally at Place des Nations in Geneva 10 years ago, in April 2009, protested Iranian President Ahmadinejad opening the UN’s ‘Durban II’ racism conference. UN Watch and its partners once again anticipate 1,000 people from across Europe to attend.

GENEVA, March 15, 2019 — A coalition of 24 organizations that oppose antisemitism and anti-Israeli prejudice—from Sweden, Ireland, France, Belgium, Israel, Italy, Germany and Switzerland—led by the non-governmental human rights group UN Watch, will be holding a “Rally for Equal Rights” this Monday, March 18, facing the UN Human Rights Council, on the same day it launches an unprecedented assault on Israel.

Eminent diplomats, authors, parliamentarians, national security experts and activists will address the event, to be broadcast live at unwatch.org/rally at 12:30 pm Geneva time (7:30 am Eastern).

The 47-nation body is set to release seven biased reports accusing the Jewish state of “war crimes,” and giving a free pass to Hamas. A few days later, the council will condemn Israel in five unbalanced resolutions that likewise make no mention of Hamas, Islamic Jihad or the Palestinian Authority.

One thousand activists from across Europe are expected to join UN Watch’s international protest against anti-Israeli hatred—the Rally for Equal Rights at the United Nations—with another 10,000 signing the petition that will be presented before the UN that day.

The new Commission of Inquiry will present its one-sided report on Israel’s “assault” on “civilian protesters” at the Gaza border, accusing Israeli soldiers of “crimes against humanity.” The UNHRC will call on the UN High Commissioner for Human Rights “to manage the dossiers on alleged perpetrators”—IDF soldiers—”to be provided to the International Criminal Court.” Click here for UN Watch’s legal critique of the shoddy report.

Additionally, the UNHRC will provide an update on their blacklist of companies who do business with Israelis living in Jerusalem’s Jewish Quarter and the West Bank, which UN rights chief Bachelet said will be released in “coming months.”

Finally, the UNHRC will release yet another five reports singling out Israel—the only democracy in the Middle East—but none on gross abuses committed by China, Turkey, Cuba, and other of the world’s worst regimes.

All of this comes as the UNHRC, since its founding in 2006, has adopted more resolutions against Israel than on Iran, Syria and North Korea combined; has convened more urgent sessions and inquiries on Israel than on any other country; and singles out Israel alone under a permanent agenda item et every session.

Before the rally on Monday, inside the UN Human Rights Council debate against Israel, UN Watch’s delegates will take the floor to call out he unprecedented assault on the rights of Israelis.

Also on Monday at the UN, next to the Council chamber, UN Watch will host an expert panel event, featuring renowned law of war expert Geoffrey Cornand three other analysts, to analyze the Gaza inquiry report.

“Through its relentless bias and demonization of the Jewish nation, the UN is abandoning its own founding principles of universality and equality,” said Hillel Neuer, executive director of UN Watch. “It’s time for the UN to uphold the UN Charter promise of equal rights for all nations, large and small.”

More information on the Rally for Equal Rights at the United Nations.