PRESS RELEASE
UN Watch Releases Evidence of Systematic Bias at UN’s Top Rights Body
GENEVA, June 25, 2015 – In the nine years of its existence, the UN Human Rights Council has condemned Israel more times than the rest of the world combined, revealed UN Watch today, ahead of a new report to be released by the Geneva-based NGO that documents endemic selectivity and politicization at the world body.
“The outcome resolution for the latest Gaza report, to be introduced at the UNHRC this week by the Palestinians together with the Arab and Islamic states, will condemn Israel exclusively, and will mark the 62nd resolution targeting Israel since the new and improved Council was created in 2006 — while the total of all other UNHRC condemnatory resolutions for rest of the world amounts to 55, with most of the world’s worst violators given a free pass, if not a seat on the council itself,” said Hillel Neuer, executive director of UN Watch.
“Sadly, with members like China, Russia, Cuba, Saudi Arabia, Pakistan, Venezuela and Qatar, the UNHRC today may possibly rank as a more corrupt international organization than FIFA.”
UN Watch released the following statistics today, and urged Secretary-General Ban Ki-moon to again rebuke the UN Human Rights Council for treating Israel out of all proportion:
I. Total UNHRC Condemnations, 2006-2015
Israel: 61
Syria: 15
Myanmar: 12
North Korea: 8
Iran: 5
Belarus: 4
Eritrea: 3
Sri Lanka: 3
Sudan: 2
Libya: 2
Honduras: 1
Afghanistan: 0
Algeria: 0
China: 0
Cuba: 0
Equatorial Guinea: 0
France: 0
Iraq: 0
Lebanon: 0
Russia: 0
Pakistan: 0
Somalia 0
Turkmenistan: 0
UK: 0
USA: 0
Uzbekistan: 0
Venezeula: 0
Vietnam: 0
Yemen: 0
Zimbabwe: 0
—————–
Total on Israel: 61
Total on Rest of World Combined: 55
Methodology: chart includes all resolutions from 2006 to 2015 that condemned specific countries. Excludes resolutions that also praise the country concerned, or those classified as mere “technical cooperation” matters. 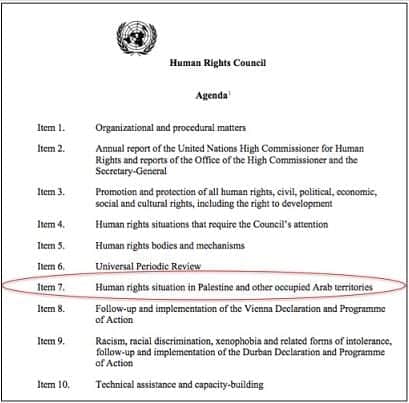 There is a special agenda item targeting Israel at every regular session of the UNHRC. No other country in the world has its own agenda item — not Sudan, not Syria, not North Korea. It is under this agenda item No. 7 on Monday, which Western democracies in the last year have mostly boycotted due to its selectivity, that the Schabas-Davis report on Gaza will be formally debated.

III. Special Rapporteurs
The permanent Special Rapporteur on Israel’s alleged violations is the only one at the UNHRC whose mandate examines only one side (Israel’s actions, but not Hamas, Islamic Jihad, or Fatah); who in advance presumes the country concerned to be guilty; and which has no expiration. By contrast, even the HRC mandate on Sudan examines all sides, government and rebels; does not presume violations in advance; and must be renewed each year. The mandate against Israel was the only one inherited in 2006 from the old Commission on Human Rights that was not subjected to the required review, rationalization and improvement (RRI) process. 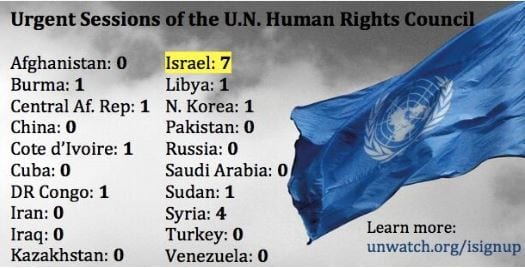