Geneva, June 16, 2008 — Today the UN Human Rights Council welcomed former Princeton professor Richard Falk as the new expert to oversee its standing investigation into “Israel’s violations of the principles and bases of international law.” When UN Watch took the floor to ask Falk to explain his publications in support of 9/11 conspiracy theories, Egypt made a failed bid to delete the question from the record.  See full video and text below.

Interactive Dialogue with the Special Rapporteur on the situation of
human rights in the Palestinian territories occupied since 1967, Richard Falk

Professor Falk, we appreciate this opportunity to ask you questions.

As we gather to address the Middle East, let us all commit to a future where every child, Palestinian and Israeli alike, will see the promise of the Universal Declaration of Human Rights become reality.

With this goal in mind, Professor Falk, let us turn to the report that you presented today, HRC 7/17.

One of the report’s exceptional features is its sharp criticism of the United Nations itself. Leading UN institutions and officials are accused of being insufficiently supportive of the Palestinians, of failing to acknowledge international law, which, according to paragraph 54, “brings the very commitment of the United Nations to human rights into question.”

Professor Falk, my first question to you is by what methodology does one challenge some UN decisions, while accepting others uncritically?

Why are there no questions about today’s Agenda Item targeting Israel, as expressed by Secretary-General Ban Ki-Moon on 20 June 2007, and I quote: “The Secretary-General is disappointed at the Council’s decision to single out only one specific regional item given the range and scope of allegations of Human Rights violations throughout the world.”

Finally, in light of the concerns expressed by the President of this Council — in the newspaper Le Temps and elsewhere — about the credibility of this council on the Middle East, could you tell us what credibility you expect your reports to have, when leading newspapers such as The Times of London are commenting on your support for the 9/11 conspiracy theories of David Ray Griffin, who argues, and I quote from the Times article of April 15th, “that no plane hit the Pentagon,” and that “the World Trade Center was brought down by a controlled demolition”?

POINT OF ORDER: EGYPT SEEKS TO DELETE THE RECORD 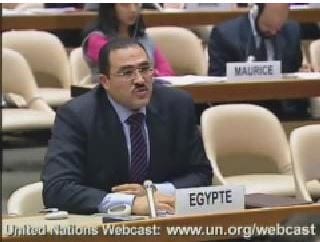 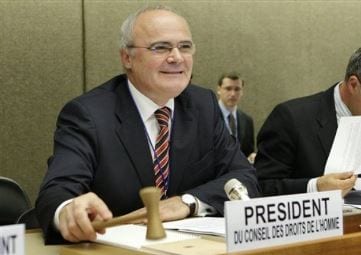