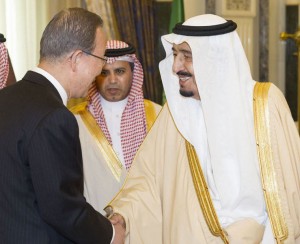 GENEVA, October 1, 2015 – Saudi Arabia has managed to block a Dutch-led draft resolution at the UN Human Rights Council that would have dispatched the UN rights office to investigate possible war crimes by the Saudis, Iran-backed Houthis and others, in the conflict in Yemen.

Instead, Saudi Arabia has sponsored its own softball resolution which classifies the entire war — with more than 2,300 killed — as a matter of “technical cooperation.”

“For those asking why it matters when Saudi Arabia wins a seat on the UN Human Rights Council, or when the misogynistic monarchy is chosen to head one of the council’s key committees, now we know,” said Hillel Neuer, UN Watch executive director. “The fundamentalist regime has just used its power on the UN council to give itself a free pass, and the people of Yemen will continue paying the price.”

For more on the U.S. position, informed by its direct support for the Saudi-led bombing attacks in Yemen, see this AP report.