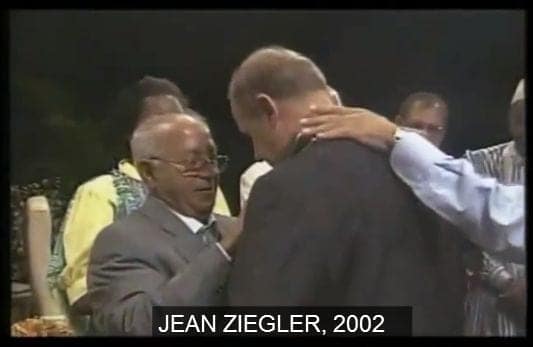 GENEVA, Sept. 29 – Switzerland should temporarily suspend its “problematic” nomination of Jean Ziegler for re-election tomorrow to the UN Human Rights Council, “until questions are resolved about significant funds he apparently received from the Qaddafi regime and other serial human rights abusers,” urged UN Watch, a Geneva-based non-governmental human rights group that is accredited with the United Nations.
Switzerland should also suspend the nomination until the UN Legal Advisor determines how Ziegler can run for a fourth term when Art. 74 of the UNHRC charter prohibits re-election more than once, said UN Watch. For details, documents, and links, please click here.
“Exactly 14 years ago today—on 29 September 2002—Jean Ziegler, already a UN human rights official, was on stage at a ceremony in Tripoli, Libya, as they placed the Moammar Qadd   afi Human Rights Prize around his neck,” said Hillel Neuer, executive director of UN Watch.
“Ziegler was part of the founding jury of the Qaddafi Prize in 1989, he was the one who announced it to the world in 1989, and he helped manage it as vice-president of a Libyan-funded front group in Geneva known as ‘Nord Sud XXI’.”
“The prize included both a medal—and a cash award of $100,000. For the next decade Ziegler repeatedly denied any connection with the prize. In 2013, however, he suddenly claimed that he had returned the medal. Yet he never explained what he did with the money, which was all funds stolen by Qaddafi from the Libyan people.”
“Ziegler should fully open up his financial accounts for inspection and allow an independent investigation concerning money he received from Qaddafi, and from other regimes for whom he lobbied at the UN, including the Castro, Chavez, and Al-Bashir regimes,” said Neuer.
An earlier Swiss nomination of Ziegler in 2013 was criticized by the Swiss parliament’s Foreign Affairs Committee and by Swiss MPs from three different parties, including Christian Lüscher, Walter Muller, Christa Markwalder, Kathy Riklin, and Andreas Aeb.

“While Gaddafi was raping countless women and girls across Libya, Jean Ziegler was busy promoting the Libyan dictator as a hero of human rights,” said Hillel Neuer, executive director of UN Watch.
Wikileaks revealed that the head of the UN’s World Food Program in 2002 urged UN Secretary-General Kofi Annan to remove Ziegler for his “profoundly immoral” and “inflammatory” politics, which “had a negative impact on the lives of the hungry.” For details, documents, and links, please click here.
At an evening ceremony on September 29, 2002, Ziegler was in Tripoli where he himself received the Gaddafi Prize, together with convicted French Holocaust denier Roger Garaudy, following a 4-day conference that discussed “space and time, death and eternity, as well as the style, language and the irony in Moammar Gaddafi’s writings.”
Ziegler joined the council in 2000 as its hunger expert, a position created for him by Cuba’s Fidel Castro government in 2000. In 2008, he moved to the council’s advisory committee. In 2012, his application to stay at the UN was rejected.
Ziegler in the past has also been condemned by the the government of Canada, UN Secretary-General Kofi Annan, High Commissioner Louise Arbour, the head of the World Food Program, and 45 human rights groups.
The UNHRC election is tomorrow.