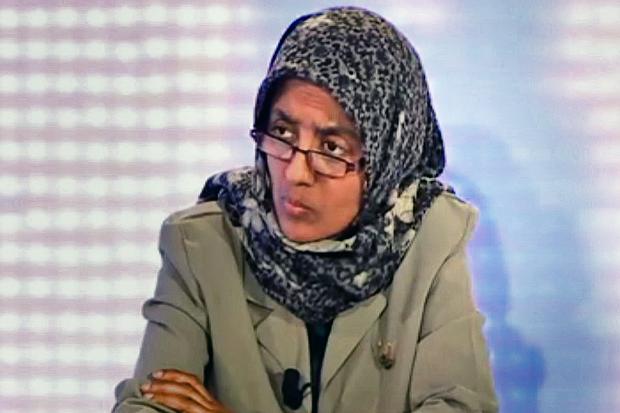 A senior employee of Amnesty International has undeclared private links to men alleged to be key players in a secretive network of global Islamists, The Times can reveal.

The charity was unaware that the husband of its director of faith and human rights featured in documents released after a criminal trial at which connections were revealed between British supporters of the Muslim Brotherhood and Arab Islamists accused of plotting to overthrow a Gulf state.

Yasmin Hussein was also linked to a Yorkshire-based aid agency that was banned by Israel for its alleged funding of Hamas terrorism; and criticised by colleagues for holding a private meeting with a Muslim Brotherhood government official during an Amnesty mission to Egypt, and staying overnight at his family’s home.

Ms Hussein, 51, was until recently the charity’s head of international advocacy and among its leading voices at the UN, where the organisation seeks to operate a strict policy of not siding with any government or political party.

Amnesty staff are asked to declare any links that may generate a real or perceived conflict of interest with its independence and impartiality.

The Brotherhood is banned as a terrorist organisation in Egypt, Saudi Arabia and the United Arab Emirates, but not in Britain. An inquiry into its role and influence in this country was ordered by David Cameron last year. The findings have yet to be published.

Ms Hussein, who is understood to receive a salary of more than £90,000, told The Times that she had “never had any association whatsoever with . . . the Muslim Brotherhood”.

Her husband, Wael Musabbeh, was one of several alleged British Islamists, none of them defendants, named in documents released after a 2013 trial in the UAE that led to the jailing of more than 60 Emirati citizens who were tried for conspiracy and sedition.

Mr Musabbeh, 54, and a Bradford community trust of which both he and Ms Hussein were directors, were said by the authorities to be part of a complex financial and ideological network in which the UK and Ireland served as important hubs, linking the Brotherhood to its group in UAE.

Amnesty, which challenged the fairness of the trial, said it knew in 2013 of documents alleging links between the defendants and British individuals and organisations, including Mr Musabbeh and the Bradford trust, but did not realise there was any connection to Ms Hussein, to whom he has been married for 20 years, because it did not know until recently that he was her husband.

Mr Musabbeh said he had no connection to the Brotherhood, was not an Islamist and was unaware of having played any role in the UAE case.

In a separate incident in 2012, Amnesty staff alerted senior management after Ms Hussein held a private meeting in Egypt with a member of the Muslim Brotherhood government, shared an evening meal with his family and stayed overnight in their home.

Ms Hussein said she was not aware that any concerns were raised about her unofficial meeting with Adly al-Qazzaz, a ministerial education adviser who was blamed by a teachers’ union for instigating the “Brotherhoodisation” of Egypt’s education system.

The charity said it “examined and robustly interrogated concerns raised by colleagues”. Ms Hussein was subsequently told that her overnight stay with the al-Qazzaz family was inappropriate. She accepted that and promised that it would not happen again.

A long-serving employee said the charity had strict rules on overseas trips, adding: “For an Amnesty delegate to accept an invitation to stay at the residence of a government official is a serious breach of protocol.”

Mr al-Qazzaz’s son, Khaled al-Qazzaz, was the Brotherhood’s presidential secretary for foreign affairs. His daughter, Mona al-Qazzaz, was the official spokeswoman for the movement in the UK. Father and son were arrested in a crackdown that followed the toppling of the Islamist government in July 2013.

Ms Hussein said she had no knowledge of the senior Brotherhood positions held by members of the al-Qazzaz family. She was “a committed human rights activist”, was not an Islamist and was “vehemently opposed” to the raising of funds “by any organisation that supports terrorism”.

She said that her meeting with Mr al-Qazzaz had been a private one. She was studying for a doctorate and wanted to speak with a government education official “to encourage the synergies between human rights and educational planning”. Difficulties in booking a hotel led her to accept the room.

Amnesty said that, with the exception of the overnight stay, it “found no evidence to suggest any inappropriate links between Ms Hussein and the al-Qazzaz family”.

The charity said that Ms Hussein denied being a supporter of the Brotherhood and has told Amnesty that “any connections are purely circumstantial”. It said it did not believe that any of her alleged connections with Islamists represented a conflict of interest.

It added: “Amnesty International does, however, take very seriously any allegations that would call into question our impartiality and is therefore investigating the issues raised.”