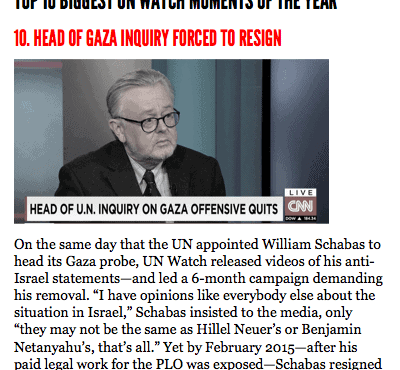 On the same day that the UN appointed William Schabas to head its Gaza probe, UN Watch released videos of his anti-Israel statements—and led a 6-month campaign demanding his removal. “I have opinions like everybody else about the situation in Israel,” Schabas insisted to the media, only “they may not be the same as Hillel Neuer’s or Benjamin Netanyahu’s, that’s all.” Yet by February 2015—after his paid legal work for the PLO was exposed—Schabas resigned in disgrace.