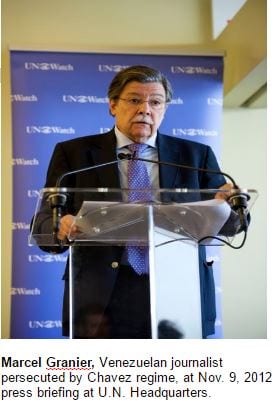 voting results and name Pakistan, Venezuela, Kazakhstan, Cote d’Ivoire, Ethiopia, Gabon, and the United Arab Emirates to the UN’s highest human rights body, though they are unfit under the U.N.’s own membership criteria. Click here for UN Watch’s full report  — Executive summary below.

“Pakistan, Venezuela, Kazakhstan, Cote d’Ivoire, Ethiopia, Gabon, and UAE systematically violate the human rights of their own citizens,” said UN Watch executive director Hillel Neuer, “and they have consistently voted the wrong way on U.N. initiatives to protect the human rights of others.”

UN Watch this year led an international coalition of 40 MPs and NGOs that appealed to U.S. Ambassador Susan Rice, the EU, and world leaders to oppose the bids by Chavez and Pakistan.

“Regrettably,” said Neuer, “neither the U.S. nor the EU said a word. By 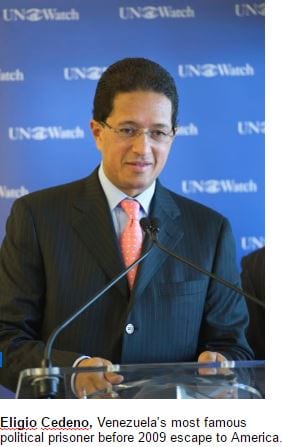 “We saw the same indifference last week when Sudan, whose leader is wanted for genocide by the International Criminal Court, was elected by 176 votes — with support from at least 10 EU states — to ECOSOC, a principal U.N. organ that oversees the accreditation and work of human rights NGOs, and decides the composition of U.N. women’s rights bodies.”

“Chavez backs the murderous regime of Syrian dictator Bashar al-Assad, and threw a judge in jail after she released a political prisoner in compliance with a U.N. ruling. Pakistan has a Christian mother of five on death row and coddles the extremists who shot a girl in the head for advocating education for women and girls,” said Neuer.

“It is an insult to their victims — and a defeat for the global cause of human rights — when the U.N. helps gross abusers act as champions and global judges of human rights.” 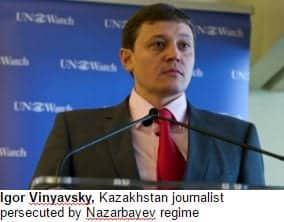 featured genuine and courageous champions of human rights who pleaded against the election of their oppressors:  Eligio Cedeno, Venezuela’s most famous political prisoner prior to his 2009 escape to America; Marcel Granier, a persecuted journalist from Venezuela; Sajid Christopher, a Christian minority rights activist from Pakistan; and Igor Vinyavsky, a journalist from Kazakhstan who was a political prisoner released from jail earlier this year. (See photos on the right, for higher quality photo album click here.) 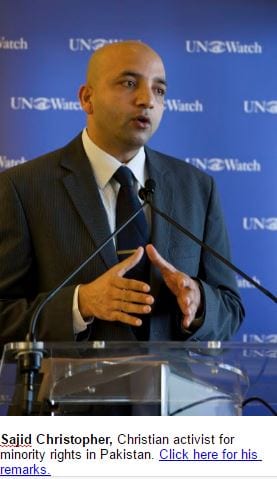 This report evaluates the countries that have submitted candidacies for the Nov. 12, 2012 election of 18 new members to the UN Human Rights Council. To evaluate qualifications we applied the membership criteria established by UNGA Resolution 60/251, in particular by examining (a) each candidate’s record of domestic human rights protection; and (b) its UN voting record. The report finds as follows:

The absence of competition this year in four out of the five regional slates is scandalous, undermining the very premise and rationale for holding elections. Nevertheless, this report reminds UN member states that they have the right to refrain from voting for countries deemed Not Qualified, even if those happen to be running on closed slates. Instead, as detailed in the report, during the ballot they can actually defeat such candidacies, and instead free up the process for qualified alternatives to come forward. We note several alternative candidacies for the relevant regional groups, who have better human rights and U.N. voting records:

In regard to candidate countries deemed Questionable, they should, at a minimum, be asked to commit to redress the shortcomings identified in this report.