GENEVA, February 19, 2021 — On the same day that a UN commission of inquiry accused Syria of “crimes against humanity, war crimes, and other international crimes including genocide,” the world body announced that the Assad regime will be elected to a senior post on a United Nations committee in charge of upholding fundamental human rights in opposing the “subjugation, domination and exploitation” of peoples.

I know some of you don't believe me, so here's the U.N. video. pic.twitter.com/PvtMpOZLIH

The 24-nation forum seeks to “decolonize,” among other places, the U.S. Virgin Islands, Guam and American Samoa.

UN Watch, an independent non-governmental human rights organization based in Geneva, is calling on UN chief Antonio Guterres, U.S. Secretary of State Antony Blinken, and the EU’s UN ambassadors to condemn the world body’s “absurd and morally obscene” plan to elect Syria to a UN committee that is supposed to protect people from abuse, which will hand a propaganda victory to the Assad regime . 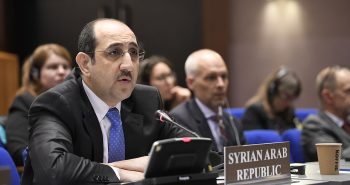 Syrian ambassador Bassam al-Sabbagh will be elected as Rapporteur, announced

The intention to elect Assad’s newly appointed UN envoy, Syrian ambassador Bassam al-Sabbagh, was announced yesterday, on February 18, in the 2021 opening session of the UN’s Special Committee on Decolonization.

“The Special Committee will take up, at a later date, the election of the Special Rapporteur of the Committee pending the arrival in New York of His Excellency Ambassador Bassam al-Sabbagh, nominated by the Syrian Arab Republic,” said Keisha McGuire, Permanent Representative of Grenada to the UN.

The Syrian delegate at the meeting clarified that the election of Ambassador al-Sabbagh would come in June, saying, “We had hoped he would be among us today. But for reasons beyond our control, he was unable to join us today. We thank the Committee for having deferred the election until the month of June.”

“That the UN announced its intention to elect the Syrian regime to a senior UN post on the same day that an inquiry accused the regime of crimes against humanity is morally repulsive and logically absurd,” said Hillel Neuer, executive director of UN Watch.

“Putting Syria on top UN committees only helps the Assad regime portray itself a UN arbiter of human rights. It’s an insult to Syria’s millions of victims,” said Neuer. “Morally, Mr. Guterres should do the right thing and at the very least condemn Syria’s candidacy.”

For example, when Syria was elected to a UNESCO human rights committee in 2013, Irina Bokova, the head of UNESCO, went on record to say that the election was wrong. Her spokesperson said: “Given the developments in Syria, the director-general does not see how this country can contribute to the work of the committees.”

About the UN Decolonization Committee

There are 17 territories still before the anti-Western committee, and most do not want independence — which is only one of the reasons the committee, dominated by non-democracies, is often criticized as a costly irrelevance.

The UN committee, which spoke of its upcoming “Caribbean regional seminar” in May 2021 on the island of Dominica to show “regional solidarity,” is notorious for holding regional seminars in tropical islands — “alternately in the Caribbean and the Pacific” — at considerable expense.

Madeleine K. Albright, as U.S. representative at the United Nations in the late 1990s, called these expenditures “frivolous and unneeded.”

UN Watch is urging U.S. Secretary of State Antony Blinken to speak out against the abuse of taxpayer dollars and the travesty of justice worked by this anachronistic and corrupt committee.