In an unprecedented move, Prime Minister Theresa May’s government changed the UK’s vote on Friday at the U.N. Human Rights Council on what it rightly called a “perverse” resolution condemning Israel for allegedly maltreating the Druze residents of the Golan Heights — and London warned that it would oppose all UNHRC resolutions on Israel if the UNHRC’s bias does not stop.

In past votes on the same text — introduced annually by Syria’s Assad regime, and more recently by the Islamic group acting as a surrogate — the UK had abstained, together with EU states.

This time, however, the UK joined the U.S. in voting No, in what experts say is a move by London to closely align itself with Washington. Brexit is about to begin and the UK increasingly needs to rely on close ties with America.

More significantly, the UK also declared on Friday that if the UNHRC doesn’t change its anti-Israel bias, they will begin to vote No on all five of the annual resolutions concerning Israel.

“Today we are putting the Human Rights Council on notice. If things do not change, in the future we will adopt a policy of voting against all resolutions concerning Israel’s conduct…”

To explain their new principled approach, the UK adopted UN Watch’s statistics showing the council’s bias, instead of numbers put out by the council’s champions which, in order to downplay the UNHRC’s bigotry, dilute the figures by wrongly conflating consequential resolutions that condemn countries with toothless texts that praise countries.

Here is the full written statement put out by the UK, in which it noted that the UNHRC’s resolutions on Israel failed to address Palestinian terrorism or glorification of terrorism:

But we must also recognise the continuing terrorism, incitement and violence that Israel faces. According to the Quartet’s report last year, there were 250 terrorist attacks, leading to the deaths of at least 30 Israelis. Renewed Hamas efforts to rebuild their tunnels are a grave concern. The scourge of anti-Semitic incitement and glorification of terrorism continue. And for as long as terrorists are treated as martyrs, peace will prove distant.

That is why we continue to call on all parties to act in accordance with international law. And that is why we supported UN Security Council Resolution 2334, which tackles both settlements and terror alike.

And yet neither “terrorism” nor “incitement” were a focus of this week’s Council discussions and resolutions. This is not acceptable.

The UK statement went on to address the overall UNHRC bias against Israel—and adopted UN Watch’s statistics (as opposed to those of council defenders and apologists which wrongly conflate UNHRC country condemnation with resolutions that praise the country concerned.)

Our enduring commitment to the universality of rights is also our source of enduring disappointment with the Council’s bias against Israel. Israel is a population of eight million in a world of seven billion. Yet since its foundation, the Human Rights Council has adopted 135 country-specific resolutions; 68 of which against Israel. Justice is blind and impartial. This selective focus on Israel is neither.

Israel is the only country permanently on the Human Rights Council’s agenda. Indeed when the Council voted to include Israel as a permanent item in 2007 – the so-called agenda Item 7 – it was Ban Ki Moon who expressed his deep disappointment “given the range and scope of allegations of human rights violations throughout the world.”

In an unprecedented move, the UK changed its vote from abstain to oppose on the Golan Heights resolution, saying that it sent a “perverse” message:

Nowhere is the disproportionate focus on Israel starker and more absurd than in the case of today’s resolution on the occupation of Syria’s Golan. Syria’s regime butchers and murders its people on a daily basis. But it is not Syria that is a permanent standing item on the Council’s agenda; it is Israel. Ten years have passed since Item 7 was instituted, and there has been no sign of change. Whilst we are unswerving in our conviction that the Golan Heights are occupied and do not recognise Israel’s annexation, we cannot accept the perverse message sent out by a Syria Golan resolution that singles out Israel, as Asad continues to slaughter the Syrian people. So we have voted against the Golan resolution.

Finally, the UK put the UNHRC “on notice,” announcing that if the “unacceptable pattern of bias” does not stop, the UK will adopt a policy of voting against all resolutions on Israel:

Ultimately peace is built, brick by brick, through trust and goodwill on all sides. Human rights violations break down that trust. And so it is incumbent on Palestinians and Israelis alike to abide by International Human Rights Law. But by continuing an unacceptable pattern of bias through Item 7, the Council discredits its necessary voice, hardening positions on both sides. For as long as the Human Rights Council continues down this disproportionate and biased path, it will make the achievement of a negotiated two-state solution harder not easier.

So today we are putting the Human Rights Council on notice. If things do not change, in the future we will adopt a policy of voting against all resolutions concerning Israel’s conduct in the Occupied Syrian and Palestinian Territories. 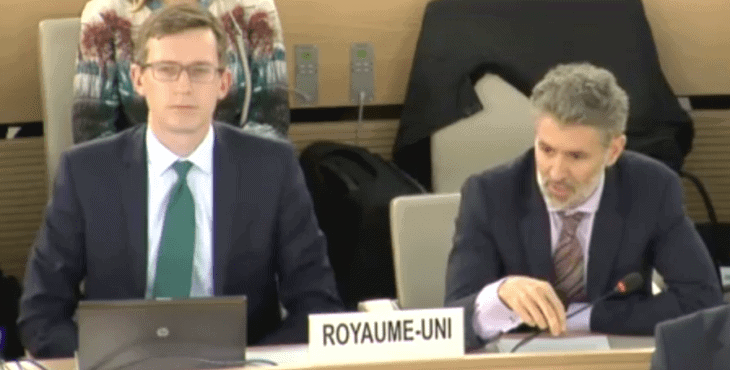