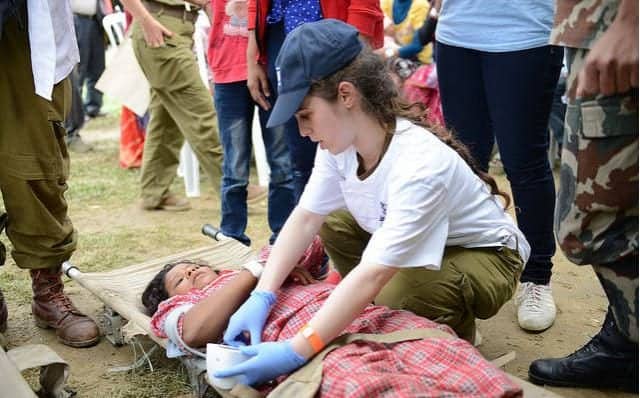 Above: Israel’s army team of medics recently treated 1,600 victims of the Nepal earthquake.

GENEVA, May 22, 2015 – As Israeli hospitals continue their life-saving treatment for escalating numbers of wounded Syrians fleeing to the Golan from the Assad regime’s barbaric attacks, the U.N. reached new heights of absurdity today by adopting a draft resolution portraying Israel as violating the health rights of Syrians in the Golan.

By a vote of 104 to 4, with 6 abstentions and 65 absent, the Jewish state was the only country in the world to be singled out on Wednesday by the annual assembly of the U.N.’s World Health Organization. The decision (A68/66) was ratified today in Geneva in a final reading by the plenary.

The resolution adopts two reports heaping blame upon Israel for allegedly violating the health rights of both the Palestinians and Druze residents of the Golan, and constituted the 2015 assembly’s only treatment of a specific country situation.

There was no debate on the health of the Yemeni people now under indiscriminate Saudi bombardment, no mention at all of the 1,850 Yemenis killed, the 7,394 wounded, and the 545,000 displaced, many of whom are desperate to find food.

On the contrary, the representative of Saudi Arabia’s theocracy took the floor, without any sense of shame, to denounce “Israeli intransigence,” and to beseech “all peace loving states” to adopt the distorted and politicized           resolution.

The despotic regime must have felt especially emboldened as the gathering took place adjacent to the Human Rights Council, where Saudi Arabia sits as a full member, elected in 2013 by more than two-thirds of the UN General Assembly.

All of this while the Wahhabist regime advertises the hiring of eight more executioners to carry out beheadings, which have spiraled this year to more than double the amount in 2014. ISIS can only be jealous of what this UNHRC member has achieved.

Nor is this year’s UN health assembly holding a single debate on the health rights of Ukranian civilians caught in a war with Russian-backed militias. The 6,000 people killed, and the one million displaced, are simply of no interest.

Preoccupied by the alleged sins of Israelis, the UN turned a blind eye to the latest warning by health experts, reported in Newsweek, that Ukraine is in imminent danger of experiencing the first polio epidemic Europe has seen for decades. “Millions of children are at risk from a range of crippling or fatal infectious diseases, including measles, diphtheria and rubella,” said the report. Yet the UN couldn’t be bothered—and Russia gleefully voted for the PLO-drafted condemnation of Israel.

Most absurd of all, though, was that the resolution falsely claimed a dire need for “health-related technical assistance” for “the Syrian population in the occupied Syrian Golan” — who in fact have excellent treatment — and said nothing about the Syrian population being slaughtered in Syria.

Instead, the scapegoating of Israel—in the form of a special debate, two lopsided reports, the resolution, and the publication of country submissions—provided a UN platform for Assad’s murderous regime.

“The Israeli occupation authorities continue to experiment on Syrian and Arab prisoners with medicines and drugs and to inject them with pathogenic viruses,” wrote Syria, in a submission laced with anti-Semitic conspiracy tropes, yet circulated as an official UN document on the conference agenda.

Unable to deny Israel’s medical treatment of wounded Syrians, the regime concocted another plot: Israel deliberately heals regime opponents so that they can “resume their subversive terrorist activities directed against the country’s peaceful citizens and its infrastructure.”

Had the EU wanted, they could have set the record straight, and taken a stand against such base demonization of the Jewish state.

Disgracefully, however, Britain, France, Germany and all other EU states joined the jackals by voting for today’s resolution.

The EU states could have introduced their own resolution about how Syria has killed more than 200,000 of their own people, including 20,000 children, caused three million to flee as refugees, and displaced another six           million within Syria itself, amounting to the utter destruction of the health rights of the Syrian people.

Yet the EU was silent. Instead, it justified its vote by claiming that the resolution was “technical.” It’s the old Brussels-Ramallah wink-and-nod game: the PLO submits a more inflammatory text at the beginning, knowing it will be revised later to allow the Europeans to pretend they achieved a “balanced” text. Israel is then expected to celebrate that it has been lynched with a lighter rope.

UN should single out Israel: as a beacon of humanity

The truth is, the UN health assembly should single out Israel—as a beacon of humanity.

The UN should single out Israel because if you walk into any Israeli hospital or clinic, you will see it replete with Palestinians receiving world-class medical treatment.

And this was true even this past summer while Hamas fired thousands of rockets at Israel, and placed their terrorist command center under the Al-Shifa hospital in Gaza, a despicable abuse of health rights unmentioned by the world health assembly.

The UN should single out Israel because its doctors have created the amazing “Save A Child’s Heart” program, which has provided life-saving cardiac surgery to more than 3,400 children from 48 different countries, training doctors and nurses from China to Zanzibar. About half the patients are Muslims from the West Bank, Gaza and other Arab countries.

The UN should single out Israel because it was a world leader in responding to the deadly earthquake in Nepal, sending a 260-member army team of medics and search and rescue experts who treated 1,600 victims, including 85 surgeries and eight infant deliveries.

And the UN should single out Israel because its Nobel Prize-winning scientists and innovative biotech companies have become global innovators who create therapeutic products, diagnostic tools and revolutionary drug-delivery techniques benefiting people all over the world.

Yet so long as the UN instead descends into irrationalism, scapegoating the Jewish state for all the world’s health problems just as medieval Europe accused the Jews of poisoning the wells, the organization betrays the cause of humanity and the noble principles upon which it was founded.