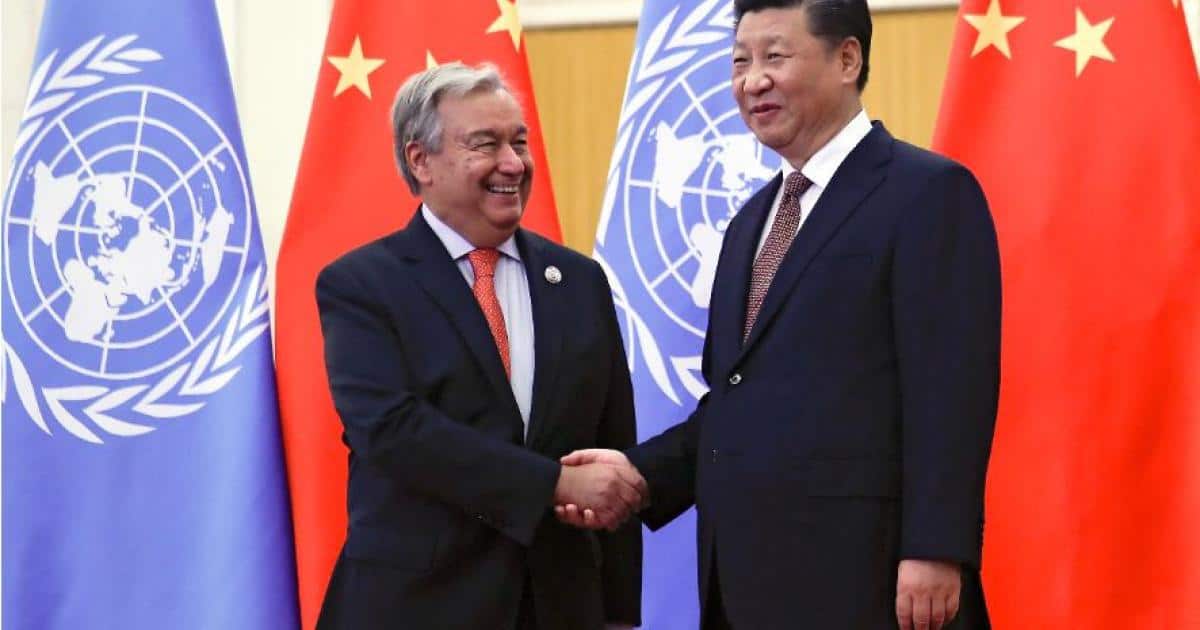 GENEVA, September 5, 2019 — The UN in Geneva confirmed it is censoring a human rights complaint on China’s mass incarceration of Uighurs that was filed by a cross-regional coalition of more than 100 UN-accredited non-governmental organizations from numerous countries including Brazil, Canada, France, India, Indonesia, Germany, Nigeria, Pakistan, South Africa, Switzerland, Turkey, Uganda, United Kingdom and the United States.

The letter by 135 NGOs urges UN Secretary-General Antonio Guterres and High Commissioner for Human Rights Michele Bachelet to condemn China’s escalating abuse of UN rules to censor, interrupt and block references at the world body to its detention of an estimated 1 million Muslim Uighurs.

The joint complaint references an incident in March, widely shared on social media, in which UN Watch director Hillel Neuer took the floor at the UN Human Rights Council to condemn China’s abuses of Uighur Muslims. Neuer was interrupted three times by the Communist regime’s delegates in an attempt to shut down his testimony.

As noted in the complaint, UNHRC President Coly Seck of Senegal urged Neuer to “stick to the agenda item” on racial discrimination, implying that China’s abuses against Muslim Uighurs did not qualify. Later in the debate, however, Seck told China to “prevent disturbing the proceedings of the room the next time.”

When UN Watch submitted the joint complaint by 125 NGOs about the incident, the UNHRC secretariat—in a break from past practice—refused to publish it, together with four other submissions.

“In our 15 years of submitting written statements to the UN for publication, this is the first time I’ve experienced such blatant, heavy-handed and unapologetic censorship,” said Neuer today.

“In 2005 and 2010, the UN asked us to make certain modest edits to written statements, such as replacing the word ‘regime’ with ‘government’, but we’ve never seen anything like this before.”

“That the UN is now barring the entire publication of major NGO statements while refusing to tell us which word, sentence or even statement is allegedly in breach of a UN rule is simply Kafkaesque. By exercising arbitrary censorship, the UN is also in breach of our right to freedom of expression, as guaranteed under Article 19 of the International Covenant on Civil and Political Rights.”

One of the other censored UN Watch submissions urged the UNHRC secretariat to stop its potentially life-threatening practice of providing China with names of human rights dissidents who are accredited to attend UN sessions. Dutch Foreign Minister Stef Block, replying to queries filed by lawmakers, noted that the UN Ethics Office confirmed that a “list of names” of activists registered to attend sessions of the UN Human Rights Council was handed to Chinese authorities by OHCHR. Whistleblower Emma Reilly tried to stop this practice, and was stifled; her case before a UN tribunal has now been stopped after the UN chief removed the judge at the last minute.

On July 30th, after UN Watch had asked why its statements were not published, the UN refused to specify which statements or words it found objectionable, instead making only a general remark that submissions must be “relevant to the work of the Human Rights Council” and must not contain “personal attacks against individuals.” The UN failed to specify where the complaint had allegedly violated any UN rule or regulation.

In reaction to this unprecedented censorship, UN Watch filed an appeal with the UN Secretary-General on August 8th, protesting the “alarming” UNHRC action, and noting its selectivity.

The appeal also noted that the HRC Secretariat’s failure to specify specific objections to the submission “infringes on NGO rights and appears to be a form of censorship.”

Yesterday, in a meeting with the President of the Human Rights Council in Geneva, his advisor confirmed that UN Watch’s appeal to UN chief Guterres was rejected. Eric Tistounet, Chief of the Human Rights Council Branch at the UN’s Office of the High Commissioner for Human Rights (OHCHR), stated that the UN has the right to “intervene” to prevent written submissions which include “personal attacks,” and that in doing so the UN is “not censoring anybody.” Listen here at 5:38-6:54.

UN Accepts Antisemitic Statements, But Not Criticism of China or UN Officials

Notably, the UN human rights office routinely accepts for publication all manner of statements—including inflammatory and even racist and antisemitic statements—submitted by more than 4,000 UN-accredited NGOs, which it circulates as official documents of Human Rights Council sessions.

UN Watch is alarmed at China’s growing influence at the UN. Recently, 50 UN member states signed a letter praising China for its human rights record and backing its policies in Xinjiang, where 1 million Uighur Muslims are being detained in camps.

“It’s bad enough that dictatorships like Iran and Venezuela endorse China’s abuses,” said UN Watch director Hillel Neuer. “But when the UN’s own human rights office joins in by censoring speeches and statements about China, and when they put Chinese dissidents and their families at risk by handing over their names to the repressive regime, then we are in a very dangerous place.”

“China’s growing and pernicious influence at the UN is alarming, and it’s time for democracies to push back to defend Chinese dissidents and victims, including Uighur Muslims, and to stand up for the right of civil society to speak out on their behalf.”