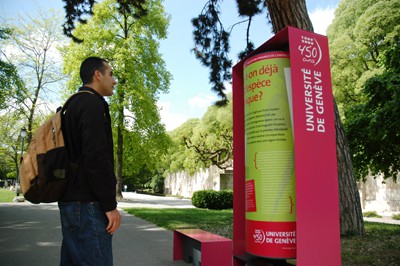 The large René Cassin square in front of the U.N’s European headquarters in Geneva now features a fitting tribute to Jeanne Hersch, the great human rights theorist and founding director of UNESCO’s philosophy division, as part of a University of Geneva series of exhibits honoring the city’s illustrious thinkers. (Click here for PDF, and see p. 2 for text on Hersh.)

There’s some irony in placing this tribute across from the home of the U.N. Human Rights Council, whose most popular official is the former Swiss socialist politician Jean Ziegler. As a professor in the 1970s, Hersch famously took a stand to oppose the University of Geneva’s appointment of Ziegler to its sociology faculty, describing him as a complete fraud:

Ziegler owes his entire university career to political pressures — going almost to the point of blackmail. If he becomes a full professor, his promotion will have been the result of political considerations exclusively; his promotion can in no way be justified on scholarly grounds… Jean Ziegler has a talent for journalism but he is interested neither in accuracy nor in truth. He is not of professorial calibre. I explicitly deny his scholarly merit as a ” sociologist”.  (1976 letter by J. Hersch to Universisty of Geneva; click for full essay co-authored by Hersch.)

Sadly, Hersch lost, and Ziegler would go on to use his undeserved tenured position to advance his extremist political agenda. As I documented in an Azure essay last year, Ziegler is a long-time supporter of tyrants as well as a pathological liar, who embodies everything that is wrong with the Human Rights Council. In 1989 he boasted about co-founding the Moammar Kaddafi Prize on Human Rights — which was awarded in 2002 to convicted French Holocaust denier Roger Garaudy, as well as to Ziegler himself — but today he completely denies it.

How sad that the U.N. has gone from great figures like Cassin and Hersch to scoundrels like Ziegler.