GENEVA, Feb. 25 – The time has come for the UN’s highest body on human rights to move from rhetoric to concrete action, UN Watch said in advance of the 22nd session of the UN Human Rights Council, a month-long meeting that opens this week with speeches by 100 foreign ministers and other dignitaries.

“Since the U.S. joined in 2009, the Council has proven able to take on some new urgent country situations, but sadly the vast majority of the world’s worst abusers continue to be given a free pass, with political and economic interests trumping action against human rights violations,” said Hillel Neuer, Executive Director of the Geneva-based human rights group UN Watch.
The council’s main annual session is expected to renew the mandates of existing country monitors on Burma, Iran, and North Korea, and to adopt follow-up resolutions on Sri Lanka and Syria.
UN Watch, which last week brought two of North Korea’s most famous escaped prison camp survivors to meet with Geneva diplomats and journalists, urged the council to establish a commission of inquiry into Pyonyang’s massive abuses.
Neuer expressed concern that the Iran resolution would simply renew the mandate yet omit any substance. “Given that the UN General Assembly’s annual resolution on Iran is replete with detail on the regime’s human rights violations, it is incomprehensible and unacceptable that the Human Rights Council lacks the political will to produce anything more than a procedural text that fails to name Tehran’s massive abuses.”
Apart from a new resolution on Mali, said Neuer, “we are unaware that the council is willing to address any new country situations.”
“We are alarmed that the council is turning a blind eye to Tibetans oppressed by China, human rights defenders persecuted in Cuba, religious minorities killed in Pakistan, women subjugated in Saudi Arabia, political prisoners held in Russia, an independent judge who was jailed and raped in Venezuela, and dissidents brutalized in Zimbabwe.”
New Council members Kazakhstan, Pakistan, and Venezuela — whose candidacies were strongly opposed by UN Watch and a coalition of NGOs — will take the floor this week for the first time since their election in November.
“The protection of human rights begins at home. Membership of the Council is a privilege that carries responsibilities, and these countries fail to meet the basic standards.”
“It is, moreover, revolting that the government of Mauritania, which continues to be complicit in the slavery of hundreds of thousands, is vice-president of the Council. This sends a devastating signal that the UN’s main human rights body does not practice what it preaches.” (The article below highlights the actual record of HRC members Kazakhstan, Mauritania and Pakistan.)

Article from The Commentator on UNHRC Session and Geneva Summit

February 24, 2013
By Daniel Schwammenthal
The speakers were never meant to live and tell their stories. Their torturers expected them to either submit or die. But somehow these men and women managed to escape from their dungeons and concentration camps to gather at the seat of the United Nations Human Rights Council.
They came to bear witness to the crimes committed by some of the very members of this esteemed UN body. Naturally, at the Palace of the Nations, where over 80 international officials, including Foreign Secretary William Hague, will over the coming days address the Council, there will be no space for these brave freedom fighters.
This is why UN Watch, together with over 20 other NGOs, organized the Geneva Summit for Human Rights and Democracy last week. Now in its fifth year, the annual summit does the sort of work the UN shies away from. It gives the victims, not the perpetrators, of state terror a podium. 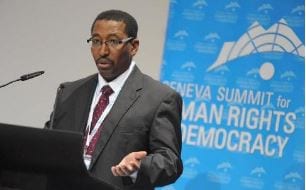 While the international dignitaries will speak under the auspices of Council Vice President Mauritania, the Geneva Summit participants heard from a former subject of the North African country—Abidine Merzough (pictured right), a man born as a slave to slave parents.
As unfathomable as it may sound, some 20 percent of Mauritanians, about 600,000 people, are still slaves. Mauritania uses Sharia to justify a racist system where Arabs exploit the country’s black African population and which “runs counter to Islam’s humanist principles,” Merzough explained.”From early on, people are taught in religious schools that slaves are the masters’ properties, who are passed along as inheritance and where the condition of slavery is transmitted from parent to child, where women slaves must submit their bodies to their masters.”
Merzough’s father, a modern-day Spartacus, rebelled against his status and led slave uprisings. This is why Merzough, the son of illiterate slaves, was able to attend school and study in Germany, where he works as an engineer.
The fact that so few people are even aware that slavery still exists is in itself a scandal. As the Iranian activist Marina Nemat put it: “Your silence is a weapon of mass destruction.” Arrested in 1982 at the age of 16 for demonstrating against the mullahs, and tortured in Iran’s notorious Evin prison for over two years, Nemat knows “mass destruction” from up close and personal.
In times when allegedly progressive politicians, such as Germany’s Green Party leader Claudia Roth,exchange enthusiastic high-fives with Iranian ambassadors, (nine seconds into the video), Nemat’s tale is particularly worth retelling.
The adult handcuffs her guards tried to use were so big, they slid off, she recounted. “So they put both of my hands in one cuff and pressed hard. I heard a crack, the sound of my wrist breaking. And the torture hadn’t even begun.”
The real torture began when the guards tied her face-down on a bed and whipped her soles until they swelled up to “grotesque red balloons” and then forced her to walk on these bloodied pieces of raw flesh.
The purpose of the torture was not to get information. “I would have signed any document to make the beatings stop. The purpose of the torture was to break the human soul.” As those who had the privilege to watch her feisty presentation could attest, her torturers utterly failed.
Sentenced to execution, she was “rescued” by a prison guard who forced her, a Christian, to convert to Islam and marry him. “You will be here forever; the world does not give a damn. Become my wife or if not I will arrest your family,” she recounted her jailor’s words. This time her previously calm voice was trembling a little. “And so I was raped over and over again under the name of marriage in a prison cell by my interrogator.”
Nemat was eventually released and managed to escape to Canada in 1991. But the past is never far from her. “I carry with me the memories of every single girl that stood in line in Evin prison. Many of them are buried in mass graves.” And as bad as the situation was when she was incarcerated, it is perhaps even worse today, she warned.
So what can the world do? Nemat has some advice about what the world should definitely not do: Giving the regime a free pass, such as when President Mahmoud Ahmadinejad is invited to soft-ball interviews on CNN or allowed to address Columbia University.
“I believe in freedom of speech, even for my enemy, but next time you give Ahmadinejad a microphone on an international stage I would really like to see a torture victim given the same amount of time on the same stage,” she said. 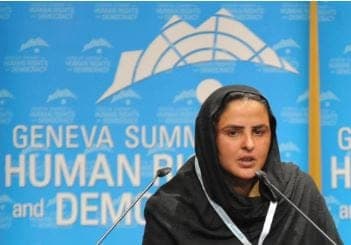 It is impossible to do justice to all the heroic dissidents who spoke at this conference within the space of a short article. There was the imposing figure of Mukhtar Mai (right), who was sentenced to gang rape by a Pakistani tribal council to restore the neighboring clan’s “honor” for an alleged offense committed by somebody else.
Instead of choosing suicide, as so many other Pakistani women do in her situation, she went to the police despite threats and opposition even from her own family. While her attackers were eventually acquitted by Pakistan’s Supreme Court, she remained unfazed and opened the Mukhtar Mai Women’s Welfare Organization. Pakistan, meanwhile, was just elected to the Human Rights Council. 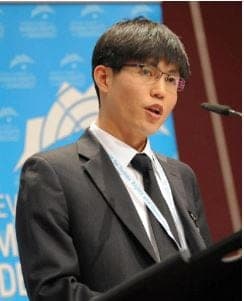 Or take Kang Chol-Hwan, who at the age of nine was arrested with his entire family and spent 10 years in Yodok, a North Korean concentration camp. If there is a hierarchy of horror it can only be surpassed by the ordeal of his fellow countryman Shin Dong-Hyuk (right), who was actually born and raised in “Political Prison Camp No. 14.”
He is the only person known to have escaped the “total control zone” of a North Korean concentration camp, where, as he explained, the guards told him he would have to perform slave labor until his death. Some 200,000 people, including entire families, are still held in these North Korean gulags.
Over the next few days, the Palace of the Nations will hear a series of lofty speeches ostensibly in support of human rights—many, though, from the world’s worst human rights violators. Tomorrow, for example, it will be the turn of H.E. Mr. Mohamed Bushara Dousa, Sudan’s Minister of Justice, an oxymoron if there ever was one.
Sudan is currently involved in its third genocidal campaign since the 1980s. And the International Criminal Court is seeking the arrest of Sudanese President Omar al-Bashir.
The dysfunctionality of allowing the worst human rights violators into the club is built into the system. All too often these torture regimes thus manage to shield each other from international scrutiny and even get rewarded plum positions, such as the Council’s Vice Presidency.
Here’s a thought for Minister Hague and his Western colleagues: if they absolutely have to attend the Human Rights Council, make sure to also stop by at the next Geneva Summit. This way they will hear from some real human rights advocates.