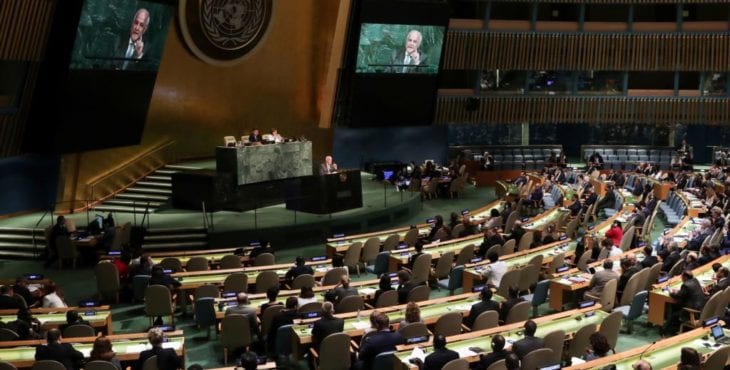 June 13, 2018 –  The UN General Assembly adopted yet another one-sided resolution condemning Israel’s “excessive, disproportionate and indiscriminate force” in responding to violent attacks on the Gaza border.

The text, sponsored by Algeria, Turkey and the Palestinians, made no mention of Hamas, which took credit for the violence.

A U.S. amendment, which would have condemned Hamas, was supported by a majority of countries (62 to 58 with 42 abstentions), yet it failed after Algeria argued that a two-thirds majority was required for passing such an important amendment, and the General Assembly president agreed.

Thus, the Algerian draft without the U.S. amendment was put to a vote, and was adopted by the usual majority of 120 to 8 with 45 abstentions.

The end result was yet another one-sided and counter-productive resolution which only serves to embolden Hamas in future conflicts. The main deficiencies in the resolution are detailed below:

1. No mention of Hamas

The resolution fails to mention Hamas, even once.

2. Ignores violence of Palestinian rioters, implying they are all peaceful protesters

The second operative paragraph deplores Israel’s use of live ammunition against “civilian protesters.”

While the majority of the participants in the so-called demonstrations may have been unarmed civilians, those who violently approached the border fence were armed members of Hamas’s military wing who intended to breach the fence and enter Israel to carry out terror attacks.

The riots were marked by violence, including throwing Molotov cocktails, catapulting flaming kites into Israeli territory intended to set fields on fire and cause harm, stone-throwing, attempting to cut through the border fence and infiltrate Israel, and firing at Israeli soldiers. These were not civilian protesters, but armed terrorists set on murdering Israelis.

The resolution expresses “deep alarm at the loss of civilian lives…in the Gaza Strip”; accuses Israel of excessive, disproportionate and indiscriminate force by Israeli forces against Palestinian civilians”; and suggests Israel is “target[ing] civilians,” and therefore Palestinian civilians require “measures to guarantee [their] safety and protection.”

However, Hamas itself admitted that most of the Palestinians killed at the border were not civilians, but the group’s own operatives. In fact, 93 out of the 112 people that were killed have been identified as terrorists affiliated with Hamas or other terror groups operating in Gaza. Even the Palestinian medic who was accidentally killed on June 1 while treating an injured man close to the border fence, sparking outrage, had boasted in a video of serving as a human shield for Hamas.

The resolution in one reference deplores rocket attacks against Israeli civilians, without condemning, or even mentioning Hamas.

The resolution ignores murderous rallying calls by Hamas leaders shouting “death to Israel,” and vowing “to draw the map of return in blood.” It further ignores the stated intentions of the rioters to massacre Israeli civilians living near the border.

Moreover, the resolution completely omits the devastation caused to Israeli civilians by Palestinian terrorist kite bombs, which since March have burned 5,000 dunams (1,235 acres) of crops worth $1.4 million, and more than 7,000 dunams (1,700 acres) of forest reserves, as well as thousands of dunams of woodland, causing extensive ecological damage.

In fact, Hamas is responsible for obstructing the delivery of humanitarian aid to Gazans by inciting rioters to burn the Kerem Shalom crossing, the main crossing for humanitarian aid into Gaza, and refusing truckloads of Israeli medical aid.