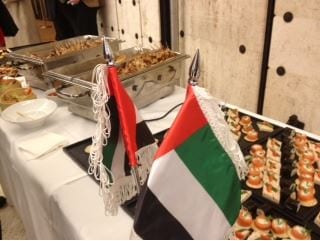 UAE threw a party yesterday at the UN to celebrate its UPR. Photo by UN Watch.

GENEVA, January 29 – The UN Human Rights Council today adopted yet another resolution on Israel, “regretting” that the Jewish state skipped a mandated review of its human rights record. Here is the text, obtained exclusively by UN Watch.

Israel’s 2012 decision to sever all ties with the the UNHRC, which maintains a permanent agenda item exclusively on Israel at every one of its sessions, meant that it would also miss its scheduled Universal Periodic Review (UPR), a process that examines all 193 countries for one day, every five years.
The one chosen earlier this month, by a draw of lots, to be one of three overseers of Israel’s review was newly elected UNHRC member Venezuela, the Iranian-allied dictatorship of Hugo Chavez.
“A jury of brigands is not justice, it’s a travesty,” said UN Watch executive director Hillel Neuer. “We regret that today’s resolution failed to acknowledge the elephant in the room: the council’s systematic bias against Israel.”
While a chorus of dictatorships today lashed out at Israel’s decision to skip the UPR, accusing the Jewish state of wreaking apocalyptic damage upon a supposedly precious world institution, in reality, the UPR is, for the most part, a mutual praise society, as documented by the 100-page 2009 report by UN Watch of the same name.
Though the New York Times today praised the UPR’s “universal and collaborative characteristics,” saying it provided “a platform to scrutinize and discuss the situation of human rights in even the most closed and repressive regimes,” it apparently forgot that earlier it had reported on how Qaddafi’s Libyan regime came out of this supposedly rigorous review with top marks:

“Until Col. Muammar el-Qaddafi’s violent suppression of unrest in recent weeks, the United Nations Human Rights Council was kind in its judgment of Libya. In January, it produced a draft report on the country that reads like an international roll call of fulsome praise, when not delicately suggesting improvements. Evidently, within the 47-nation council, some pots are loath to call kettles black, at least until events force their hand.” – New York Times, March 5, 2011

Former Amnesty USA director Suzanne Nossel called the UNHRC’s UPR report “abhorrent.”
“It’s not for nothing that despots walk into this court with confidence and ease,” said Neuer. UN Watch reported on yesterday’s lavish UPR party put on by the United Arab Emirates.
“What is more,” said Neuer, “those accusing Israel of desecrating the UNHRC temple are the same who systematically turn a blind eye to the council’s persistent and pathological lynching of Israel: the special agenda item and special day against Israel at every session; the lopsided amount of resolutions against Israel, often amounting to more than the total adopted on the rest of the world combined; Israel’s exclusion from any of the council’s regional groups; and the completely one-sided mandate of the council’s permanent investigator on Palestine, Richard Falk, a man who was condemned by Ban Ki-moon for endorsing the 9/11 conspiracy theory, and who supports Hamas.”
“For a council that does such things on an ongoing basis to then accuse Israel of undermining principle is the height of audacity and hypocrisy; the complainants come with unclean hands — very unclean hands,” said Neuer.
How UPR is Used by Worst Abusers
UN Watch is deeply concerned that during the UPR reviews of the world’s worst abusers, the proceedings, despite seeing a minority of genuine scrutiny, have been dominated by mutual praise.
We share the view of UPR supporters that the cause of human rights is advanced by the placing on record of positive recommendations and pledges of compliance.
Conversely, however, it also logically follows that the placing on record of a great many false statements harms the cause of human rights.
When members of large voting blocs grant each other immunity from scrutiny, as happened during the 2010 review of the Qaddafi regime, and of Venezuela in March 2012, the voices of victims are silenced.
UN Watch is concerned by a deepening culture of mutual praise, where members of large voting blocs grant each other immunity.
A substantial UN Watch study in 2009 measured how countries conduct UPR. Points were given to the degree a state scrutinized the country concerned, identifying specific and genuine human rights issues, and challenging non-compliance—which is the only way UPR can help victims.
Of 55 countries examined, including all 47 Council members, only 19 had overall positive scores. These included Canada, France, Germany, Netherlands, the UK and the US.
Those found to contributed negatively to the process included Angola, Egypt, Iran, Malaysia, Nicaragua, Saudi Arabia, Bangladesh, China, Cuba, Djibouti, Indonesia, Libya, North Korea, Pakistan, the Philippines, Syria, Sudan and Zimbabwe.
The danger of the mutual praise is that the UPR review is then used as a seal of legitimacy.
For example, the government of Sri Lanka, on its Geneva Mission website, boasts of how it won “high praise for protecting human rights” and how “a number of delegations praised Sri Lanka for the quality of its national report.”
On 13 April 2008, the Philippine Daily Inquirer reported as follows: “We felt that we were on Cloud 9, Executive Secretary Eduardo Ermita said, in reporting the applause accorded the Philippine human rights presentation at the UPR.”
On 12 February 2009, IPS reported as follows: “Cuban delegates hailed the document, registering the opinions expressed at the debate during the UPR mechanism as a ‘victory for truth and justice’.” The Cuban mission website features a similarly glowing account.
To improve the UPR, it will be important to reflect on all uses of this mechanism, the positive as well the counter-productive.