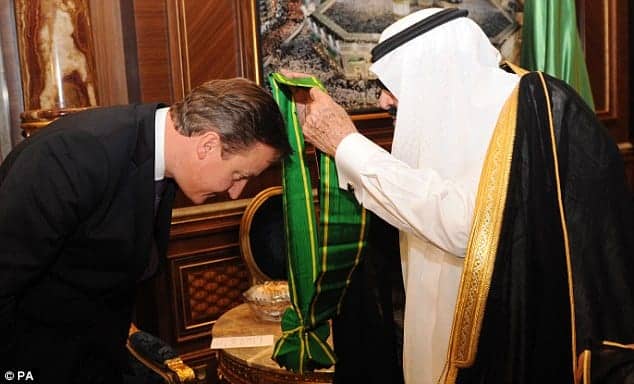 In September, UN Watch revealed evidence—based on secret Saudi diplomatic cables—that Britain made a deal to vote Saudi Arabia onto the UN Human Rights Council. UN Watch worked together with The Australian, which published an exclusive report. This became a top story in the UK, reported by the Financial Times, The Daily Mail, The Independent, The Times of London and The Guardian. In a tense interview with Channel 4’s Jon Snow, British Prime Minister David Cameron effectively conceded that UN Watch’s report was accurate.

David Cameron has repeatedly refused to explain why the British government agreed to a “squalid” deal with Saudi Arabia, as the country prepares to behead and crucify a teenager for engaging in pro-democracy protests during the Arab Spring.

In an excruciating interview with Channel 4’s Jon Snow, the Prime Minister floundered for a response when questioned on the recently exposed secret deal with the Saudis to allow both nations’ election to the UN Human Rights Council in 2013.

“This sounds a bit squalid for one of the most human rights abusing regimes on earth,” Mr Snow comments.

The PM claimed he would attempt to personally raise the case of Ali Mohammed al-Nimr, a 17-year-old teenager arrested when he was 14 who faces the death penalty, but only if there was an “opportunity” with Saudi authorities.

“We oppose the death penalty anywhere and everywhere in all our international contacts,” Mr Cameron added.

Asked three times by Mr Snow why – if Mr Cameron “completely disagreed” with the repressive state over their “punishment routines” as he claimed earlier – the UK had agreed to the deal with the Saudi government the PM claimed: “Well, I’ve answered the question.”

“Well, that isn’t an answer is it? I mean we have done a horrid deal,” Mr Snow responds.

Finally, the Conservative leader claimed it was because the British government has “a relationship with Saudi Arabia.”

“It’s because we receive from them important intelligence and security information that keeps us safe,” Mr Cameron said.

“The reason we have the relationship is our own national security. There was one occasion since I’ve been prime minister where a bomb that would have potentially blown up over Britain was stopped because of intelligence we got from Saudi Arabia.”

“Of course it would be easier for me to come on your programme and say: ‘I’m not having anything to do with these people, it’s all terribly difficult etcetera etcetera.’ For me, Britain’s national security and our people’s security comes first,” he added.

[UN Watch revealed documents this week purporting to show the UK and Saudi Arabia supported each nation’s election the UN Human Rights Council in 2013. Both countries were later elected to the 47-member council until the end of 2016.]