GENEVA, MARCH 15, 2016 — UN Watch hosted an event today at the UN to shed light on human rights abuses in Iran, as covered here in the LA Times. Victims and advocates gave vivid testimony of their first-hand experiences in Iran with a particular focus on the human rights of women. The meeting aimed to raise awareness of the suffering endured by people in Iran by revealing the systematic discrimination and human rights abuses in the country. 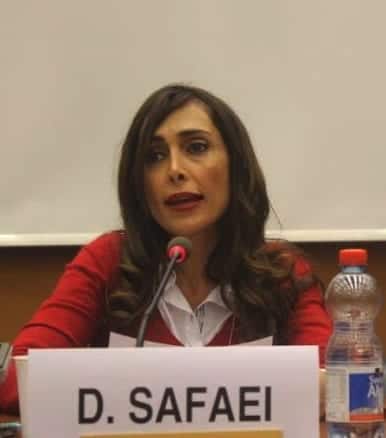 Darya Safai (above) is an Iranian campaigner for women’s rights and founder of the “Let Iranian Women Enter Their Stadiums” campaign. “Life of women in the Islamic Republic of Iran is imbued with discrimination, under the veil of Sharia law,” Safai said. Despite all this Safai maintained that the people of Iran “keep the hope” for change. She focused on the need for a “change in the law” to move away from a state of affairs in which “the dictatorial regime of Iran retaliates against every little protest.” She reiterated the necessity for the international community to be attentive to the violations of human rights inside Iran. “If we close our eyes it gives [the regime] a sort of legitimacy.” A copy of her powerful testimony can be found here.

Maryam Faghihimani is an Iranian advocate for human rights, entrepreneurship, and the right to education. “We need change, not reform,” insisted Fahihimani, when questioned about what actions need to be taken to improve human rights in Iran. “Sharia should not be part of the political system in Iran or any other country.”

The LA Times reported on the event. The article can be found here.