UN Watch mourns Kofi Annan, "a great advocate of reform at the UN" 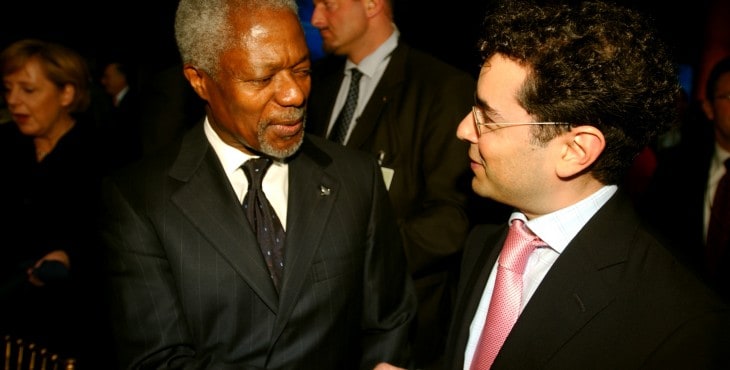 Above: UN chief Kofi Annan with Hillel Neuer, Executive Director of UN Watch. Washington, DC, May 2006.
GENEVA, August 18, 2018 – UN Watch mourns the loss of Kofi Annan, a revered statesman who will be remembered as the secretary-general who led the move to scrap the UN’s discredited Human Rights Commission, and who was the first UN chief to publicly and repeatedly call for an end to the UN’s obsessive and one-sided targeting of Israel.
UN Watch enjoyed a long relationship with Mr. Annan. Even as he acknowledged being “on the receiving end of some sharp criticism from UN Watch,” Annan encouraged the work and mission of UN Watch, and understood its value as an outside watchdog mandated to hold the world body accountable to the principles of the UN Charter.
Annan’s Support for Reform of UN Commission on Human Rights
Annan will be remembered for leading the successful effort to scrap the UN’s discredited Commission on Human Rights, and as the first secretary-general to decry its failures. In 2005, Annan dropped a bombshell when he declared that countries had sought membership “not to strengthen human rights but to protect themselves against criticism or to criticize others.”
The commission was undermined by the “politicization of its sessions” and the “selectivity of its work”; it suffered from “declining professionalism” and a “credibility deficit”— which “cast a shadow on the reputation of the United Nations system as a whole.
Annan called for a new Human Rights Council. However, when he saw that it began to repeat the pathologies of its predecessor, such as the singling out of Israel, he spoke out, expressing the hope that the Council would deal with the Middle East issue “in an impartial way” and “not allow it to monopolize attention at the expense of others where there are equally grave or even graver violations.”
Annan Fought UN’s Anti-Israeli Discrimination
Annan was the first UN secretary-general to so strongly and consistently join UN Watch’s call on the world body to end its self-destructive anti-Israeli discrimination.
In 1998, on a visit to Israel, Annan acknowledged UN bias against the Jewish state, and he called to “rectify an anomaly: Israel’s position as the only Member State that is not a member of one of the regional groups, which means it has no chance of being elected to serve on main organs such as the Security Council or the Economic and Social Council. This anomaly should be corrected. We must uphold the principle of equality among all United Nations Member States.”
Annan recognized that “Israelis see hypocrisy and double standards in the intense scrutiny given to some of [Israel’s] actions, while other situations fail to elicit the world’s outrage and condemnations.”
Annan called for the “normalization of Israel’s status within the United Nations.”
In 1999, speaking at a tribute to UN Watch founder Morris Abram, Annan said that “The exclusion of Israel from the system of regional groupings; the intense focus given to some of Israel’s actions, while other situations sometimes fail to elicit the similar outrage; these and other circumstances have given a regrettable impression of bias and one-sidedness.”
On numerous occasions, Annan repeated his objection to the exclusion of Israel from any regional group, which eventually led to Israel’s inclusion in the Western group.
Annan Opposed Antisemitism, Oversaw UN’s First Holocaust Remembrance

As Secretary-General, Annan played a singular role in leading the successful efforts to convene a UN special session to commemorate the liberation of Auschwitz, as well as to enshrine an annual Holocaust commemoration day at the UN.
Annan launched this important conversation on June 21, 2004. For the first time in its history, the United Nations held a major event dedicated to combating anti-Semitism.
“A human rights agenda that fails to address antisemitism denies its own history,” said Annan, as he appealed to UN human rights officials to take on the cause of combating anti-Semitism.  He called for member states to take action against antisemitism, and he also urged member states to follow the example of the OSCE and declare “unambiguously that international developments or political issues, including those in Israel or elsewhere in the Middle East, never justify antisemitism.”

Noting how antisemitism was not addressed by the UN, even as it condemned other forms of discrimination, Annan asked: “Are not Jews entitled to the same degree of concern and protection?”

Annan’s call to action specifically appealed to his organization’s human rights apparatus—the Office of the High Commissioner for Human Rights (OHCHR)—to work with the UN experts on racism and religious intolerance to “actively explore ways of combating antisemitism more effectively in the future.”
Regrettably, as documented in UN Watch’s 2008-2017 report card, Annan’s call to action was ignored, and High Commissioner Zeid has taken no meaningful action on antisemitism during his 4-year tenure.

Annan Recognized Valuable Work of UN Watch
“I deeply appreciated the valuable work performed by UN Watch,” wrote Annan. “I believe that informed and independent evaluation of the United Nations’ activities will prove a vital source,” he added. Annan also expressed his gratitude to UN Watch founder, Ambassador Morris Abram, for his support at a “critical time” when Abram approached U.S. congressional leaders to help resolve the matter of arrearages of United Nations dues.
In 1999, Annan spoke at the tribute dinner held in honor of Abram, whom he described as a “forceful advocate of freedom, tolerance and civil rights” and “a global citizen of the first rank.” Annan said all this “even as head of an organization which has been on the receiving end of some sharp criticism from UN Watch.”