The op-ed below by UN Watch executive director Hillel Neuer appears in the latest edition of The Jerusalem Report. 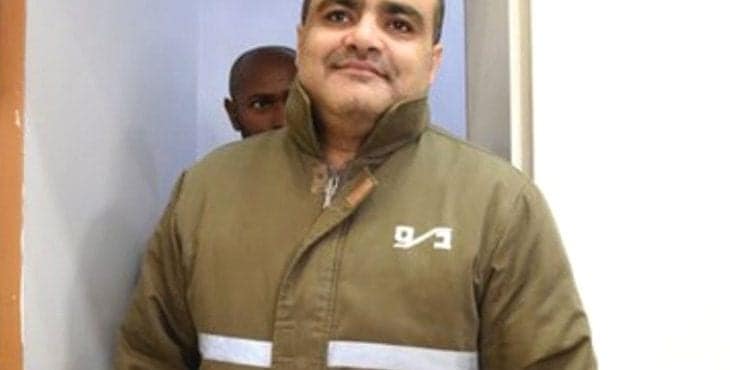 Accused Hamas agent Mohammed El-Halabi, the Gaza director of the
giant Christian aid group World Vision, appears in court, August 4.
The UN featured him on its website as a “humanitaran hero.”
By Hillel C. Neuer
The arrest of Palestinian humanitarian officials in Gaza from two separate international organizations – charged with siphoning aid resources to support Hamas terrorism – along with allegations about at least two other entities raises troubling questions about the culture within the United Nations and non-governmental agencies that allowed such crimes to take place.
First there was the announcement by Israel’s Shin Bet (Israel Security Agency) on August 4 that Mohammed El-Halabi, director of the Gaza branch of World Vision — a billion-dollar Christian aid agency — was indicted for systematically diverting tens of millions of dollars in aid money to Hamas.
According to the Shin Bet, El-Halabi admitted to being a lifetime Hamas member who was dispatched in 2005 to infiltrate World Vision.
El-Halabi had a good chance of being accepted because he had already worked for UNDP, the UN Development Agency — where he also helped Hamas — and because his father, Khalil al-Halabi, holds a senior post at UNRWA in Gaza which he, too, uses to support Hamas.
Once in World Vision, El-Halabi employed a sophisticated apparatus for transferring funds and resources to Hamas. Over several years, El-Halabi helped Hamas construct terror tunnels, pay their salaries, and build military bases.
In addition, according to the charge sheet, in 2014 Halabi recruited a Palestinian aid worker from Save the Children, a major NGO based in the UK, to join Hamas’ military wing.
After the revelations, Australia and Germany froze their funding to World Vision, and the organization suspended its Gaza operations. Save the Children, for its part, is “making inquiries into this matter.”
Then on August 9, Israel announced that it had indicted Waheed Borsh, an engineer for UNDP, for diverting UNDP resources to build a jetty for Hamas’ naval forces, and to prioritize house construction for Hamas members. Borsh also helped Hamas recover hidden weapons found by UNDP workers.
In reaction, UNDP said it was “greatly concerned” over the charges, and is now conducting a “thorough internal review” of the “processes and circumstances surrounding the allegation.”
A thorough internal review is indeed necessary, but of far more than particular allegations against two individuals.
All UN agencies and NGOs in Gaza — and the Western countries which provide the bulk of their money — need to ask themselves why Hamas is apparently able to infiltrate their organizations with such ease.
Take World Vision, for example. Tom Getman, World Vision’s former head of Palestinian operations, went on to represent the organization at the UN Human Rights Commission, where he fomented a rabid, theologically-based hatred of the “Zionist enterprise” and its “idolatry.”
In a video interview with fellow anti-Israel activist Rev. Steven Sizer, Getman called Hezbollah terrorists and anti-Semites his “friends,” citing their spiritual advice about going after Israel.
“Like our friends [Hezbollah chief Hassan] Nasrallah, and [Hezbollah’s late spiritual leader] Sheik Fadlallah – and many others in the Middle East – have said to us, the problem with you Christians is you don’t do what’s in the book.”
How can World Vision be expected to weed out Hamas agents when overtly pro-Hezbollah officials like Getman are in charge? That’s asking the foxes to guard the henhouse.
The same holds true for the UN agencies in Gaza, which have a history of pandering to the Hamas regime.
During the Gaza war of 2014, despite UNDP’s duties of neutrality and impartiality, the organization sided with Hamas against Israel, whitewashing the systematic exploitation by Hamas of homes, schools, mosques, and hospitals to store weapons, install rocket launchers, and hide entrances to terror tunnels.
Frode Mauring, then the UNDP Special Representative on Palestine, tweeted vehemently against Israel. He expressed sympathies for Gaza’s population, but not for millions of Israelis forced into bomb shelters to escape thousands of Hamas rocket barrages.
On July 14, 2014, for example, Mauring tweeted, “Israel showed restraint in Gaza before attacking? You must be kidding.”
After the war, UNDP published a “Preliminary Assessment” prepared by the Applied Research Institute – Jerusalem, a Palestinian NGO that advances the BDS (boycott, divestment, and sanction) agenda against Israel.
The 30-page document failed to mention Hamas once. Discussion of damage to Gaza buildings omitted that Hamas used them for rocket launching against Israeli civilians, deliberately jeopardizing Palestinian civilians.
How can we expect UNDP to remedy internal “processes” when its leaders openly broadcast a see-no-evil approach to Hamas terror?
The latest arrests ought to be a wake-up call. Palestinians deserve to be helped, but Hamas — an organization that exults in murdering Jewish children — is the opposite of humanitarianism.
If the UN and NGOs fail to correct their ways, taxpayers in the US, Canada and Europe should do it for them, by demanding a permanent freeze to the funding of terror.
Hillel C. Neuer is the executive director of UN Watch in Geneva.
Egyptian envoy boycotts UN's new monitor on anti-gay violence; "contrary to my convictions and the values I stand for"
The U.N. and Israel: Key Statistics from UN Watch