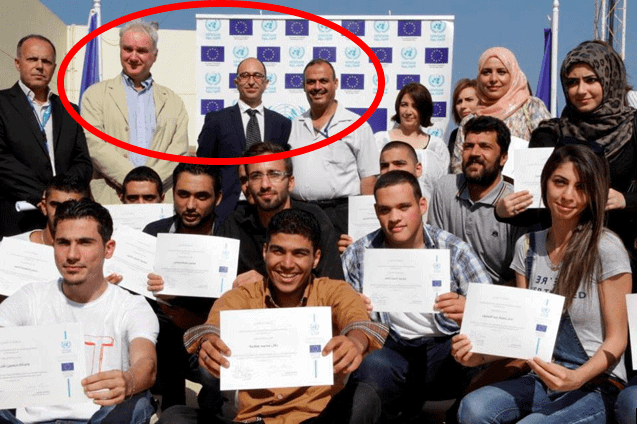 Germany’s Matthias Schmale, UNRWA’s Gaza chief (left) with UNRWA school principal Ahmad Nasser (right),
who on Hitler and Jews says “he should not have left any of them.”

GENEVA, Oct. 2, 2018 – UNRWA’s European managers fled Gaza into Israel yesterday under threats from their own protesting employees. “Funny,” said UN Watch’s Hillel Neuer, “how when Hamas orchestrates violent attacks on Israel border — with guns, grenades, molotov cocktails & wire-cutters — UNRWA spokesman Chris Gunness tweets about Palestinians ‘exercising their right to protest’; yet now that UNRWA’s German and British managers are themselves the target, they cry out about a grave ‘security and safety risk’ and run for their lives to Israel. Hypocrites!”

Today the European Parliament to hold plenary session on European funding of UNRWA. EU & its member states give hundreds of millions of Euros to an agency that employs preachers of hate — even as today UNRWA's European managers flee for their lives. #EPlenary @TonoEPP @ArneLietz https://t.co/zUrcZTjfkU

These international UNRWA managers knowingly employ teachers who praise Hitler & preach anti-Semitism & terrorism. I sent @matzschmale our info & he denied everything. Now they are literally running to Israel—from their own Gaza employees—to save their own lives. EU funds this. pic.twitter.com/u27zsbAJ34

“UNRWA is not serving Palestinians. It's a political arm that claims to serve Palestinians. We have for two years asked UNRWA to reform itself because it has this ongoing number of refugees that is unsustainable. We can’t sustain—and the world knows.” @NikkiHaley, Sept. 4, 2018 pic.twitter.com/e9Uacg4N3W