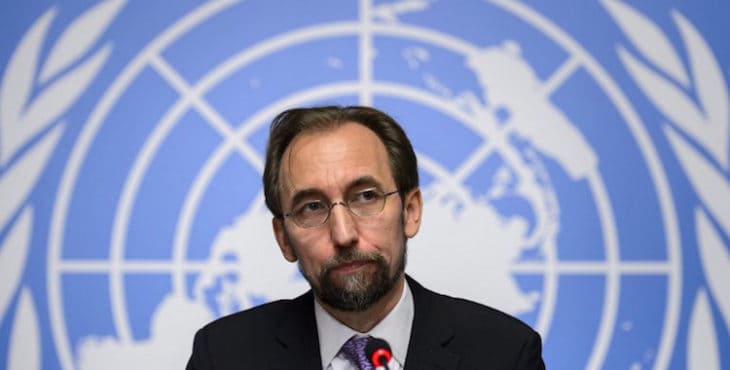 GENEVA, 30 August 2018 – A whistleblower who formerly worked at the UN human rights office is objecting to the Dutch government’s upcoming €100,000 award on September 3rd for outgoing UN high commissioner for human rights Zeid al-Hussein. Full letter below by Miranda Brown.

Letter below from Miranda Brown

His Excellency Stef Blok
Minister of Foreign Affairs, The Netherlands
Her Excellency Sigrid Kaag
Minister for Foreign Trade and Development, The Netherlands 27 August 2018
Dear Minister Blok and Minister Kaag,
URGENT
I write to object formally to the Government of The Netherlands’ decision to award the 2018 Human Rights Tulip to the outgoing UN High Commissioner for Human Rights Zeid Ra’ad Al Hussein. I understand that you are scheduled to award this honour to Mr Al Hussein at a ceremony in The Hague on 3 September 2018.1 Further, I understand that Dutch taxpayers fund the prize of 100,000 euros.
Mr Al Hussein’s tenure as High Commissioner for Human Rights and head of the Office of the High Commissioner for Human Rights (OHCHR) has been marred by ongoing and systematic retaliation against whistleblowers who sought to protect human rights at OHCHR, including Mr Anders Kompass, Ms Emma Reilly and myself. Please note that all three of the OHCHR whistleblowers are European Union nationals: Anders Kompass (Swedish), Emma Reilly (Irish/British), Miranda Brown (German/British and Australian). You may know that the Government Accountability Project (GAP), the lead organisation supporting whistleblowers in international organisations has repeatedly called for Mr Al Hussein to be placed under investigation for his mistreatment and retaliation against whistleblowers.2,3
Mr Kompass and I disclosed the child sexual abuse and paedophilia by peacekeepers in the Central African Republic (CAR) and the institutional failure in responding to it. This failure was in part attributable to Zeid Ra’ad Al Hussein. Moreover, our allegations were substantiated by an independent panel established by Secretary General Ban Ki-moon.4
The third whistleblower at OHCHR, Ms Emma Reilly disclosed that OHCHR had been providing names of Chinese dissidents to the Chinese Government ahead of Human Rights Council meetings, thereby placing them in danger – she has been subjected to ongoing retaliation ever since. Our cases are well- known and have been widely reported in the media.5,6,7
In March 2018, it came to our attention that High Commissioner Zeid Ra’ad Al Hussein’s Spokesperson has engaged in a concealed campaign of defamation and blacklisting to the media against Anders Kompass and me for our disclosures. In his official emails in response to a formal enquiry from a journalist about my whistleblowing on the child sexual abuse, Mr Al Hussein’s Spokesperson referred to Anders Kompass and me as “dishonest”, our actions as “disgusting”, and he wrote that we were the “shittiest” people. Mr Al Hussein’s Spokesperson also disclosed in writing to the journalist that he had been having similar communications with other journalists for over two and a half years (since our disclosures of the child sexual abuse became public). Mr Al Hussein has failed to respond to my report of harassment and abuse of authority in relation to his Spokesperson’s smear campaign and defamatory emails to the media.
The Government of the Netherlands’ decision to award Mr Al Hussein with the Human Rights Tulip affects me and other UN whistleblowers directly. My human rights and that of two other whistleblowers at OHCHR have been violated and continue to be violated as evidenced by Mr Al Hussein’s Spokesperson’s egregious statements to the media. By rewarding Mr Al Hussein with the Human Rights Tulip, the Dutch Government is implicitly sanctioning the retaliation and ongoing violation of our human rights, as well as Mr Al Hussein’s failure to respond to the allegations of harassment and abuse of authority.
I also am concerned that recognizing Mr Al Hussein as planned will represent a public embarrassment for the Government of the Netherlands, and I request that the Dutch Government refrain from proceeding. The Government of the Netherlands should insist that Mr Al Hussein resolve the outstanding cases of the OHCHR whistleblowers and respond to the allegations of harassment and abuse of authority prior to awarding him the Human Rights Tulip.
I am at your disposal should you wish to discuss these issues further. You may also wish to consult Ms Beatrice Edwards at the Government Accountability Project and Ms Anna Myers at the Whistleblowing International Network.
Yours faithfully,
Miranda Brown
Copy: Pieter Omtzigt MP, Anders Kompass, Emma Reilly, Government Accountability Project (GAP), Whistleblowing International Network (WIN), UN Special Rapporteur on Freedom of Expression David Kaye
1 https://www.government.nl/latest/news/2018/08/14/high-commissioner-for-human-rights-zeid-raad-al-hussein- to-receive-2018-human-rights-tulip
2 https://www.whistleblower.org/blog/091009-trouble-un-ohchr-investigate-high-commissioner
3 https://www.whistleblower.org/blog/101014-un-high-commissioner-who-retaliates-against-whistleblowers-will- step-down
4 https://www.theguardian.com/world/2015/dec/17/un-gross-failure-sexual-abuse-french-troops-central-african- republic
5 https://www.devex.com/news/the-high-price-of-being-a-un-whistleblower-92752
6 https://www.devex.com/news/leaked-un-staff-survey-shows-fears-over-whistleblowing-ethical-accountability- 92234
7 https://www.devex.com/news/accountability-in-the-aid-sector-humanitarians-can-no-longer-be-above-the-law- 92133
PrevPreviousBucharest Diary: New Memoir by UN Watch Chair Alfred Moses
NextCuba receives UN complaint on political prisoner Eduardo CardetNext