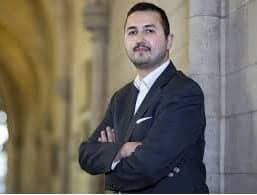 GENEVA, August 18, 2014 –  Breen Tahseen (photo above), an Iraqi diplomat whose father, Prince Tahseen Saeed Bek, is the leader of the Yazidi people, will join together with leaders from the Iraqi Christian community at a rally tomorrow in Geneva calling for the UN Human Rights Council to meet urgently on the destruction of minorities in Iraq.

Organized by the Geneva-based non-governmental human rights group UN Watch, the rally will call on UN rights chief Navi Pillay to take action to convene an urgent session of the 47-nation council on the ISIS atrocities in Iraq against minorities, echoing a recent appeal by more than 20 MPs and human rights activists.

UN Watch has also arranged for the Yazidi and Christian leaders to meet with key diplomatic figures in the UNHRC system.

Diplomats in Geneva have quietly discussed a special session, with the Vatican also pressing for action, but some prefer waiting several weeks until the regular session opens in the second week of September.

What: Demonstration in support of Christians and Yazidis in Iraq
When: Tuesday, August 19, 2014, at 1:00 pm
Where: Place des Nations, in front of the UN European headquarters in Geneva