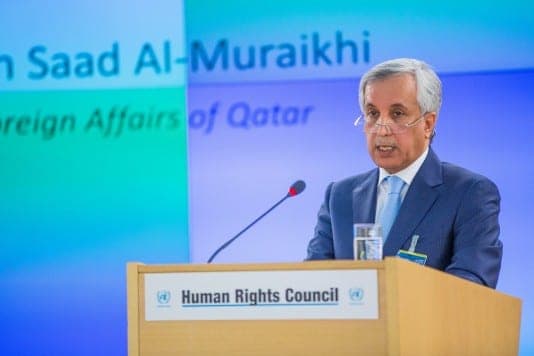 Soltan bin Saad Al-Muraikhi (above), Qatar’s State Minister for Foreign Affairs, presented the country’s report to the Human Rights Council on May 15, 2019.

GENEVA, May 15, 2019 — Despite Qatar’s gross human rights abuses, nation after nation lined up today at the UN Human Rights Council to laud the government’s track record on human rights, as the country underwent a mandatory review that all UN member states undergo every five years. Qatar itself is a member of the Council. (See quotes below.)

According to a count by UN Watch, 91 out of 104 countries that took the floor this morning at the UNHRC praised Qatar for its human rights record.

An additional 6 countries expressed some praise for Qatar’s alleged progress, in addition to applying genuine scrutiny. If one includes these statements, then 97 out of 104 countries, or 93%, expressed praise for the country.

While the UNHRC’s mandatory review exercise is meant to scrutinize all nations every five years in order to improve the lives of victims, the vast majority of countries who spoke in today’s UNHRC peer review exercise ignored Qatar’s severe restrictions on free and fair elections, forced labor, and criminalization of homosexuality.

Instead, many lauded Qatar’s alleged “progress” in the field of women’s rights, even though it is one of the worst countries in the world for women—ranking 127 out of 149 countries for gender equality by the World Economic Forum.

Representing Qatar at the UN session was Soltan bin Saad Al-Muraikhi, Qatar’s State Minister for Foreign Affairs, who, along with his delegation, claimed significant strides in the government’s protection of human rights. One member of Qatar’s delegation defended restrictions on the right to assembly.

“Any restrictions to the right to assembly are grounded in the government’s right to maintain public order,” said the Qatari delegate.

Following is a selection of the praise of Qatar at today’s review:

However, a minority of countries—including Britain, Australia, Norway, Denmark, and Germany—rightly expressed concern for women’s and workers’ rights in the country.