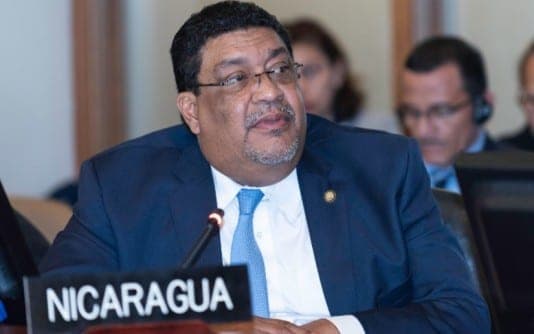 Valdrack Jaentschke, Nicaragua’s vice minister of foreign affairs, presented the country’s report to the Human Rights Council on May 15, 2019.

GENEVA, May 16, 2019 — Despite Nicaragua’s brutal crackdown on dissent since protests erupted in April 2018, UN delegates lined up yesterday at the Human Rights Council to applaud the government’s track record on human rights, as the country underwent a mandatory review that all UN member states undergo every five years. (See quotes below.)

According to a count by UN Watch, 45 out of 90 countries that spoke praised the regime of Daniel Ortega for its human rights record.

An additional 18 countries expressed some praise for Nicaragua’s alleged progress, in addition to applying genuine scrutiny. If one includes these statements, then 63 out of 90 countries, or 70%, expressed praise for the country.

While the UNHRC’s mandatory review exercise is meant to scrutinize all nations every five years in order to improve the lives of victims worldwide, many countries who took the floor ignored Nicaragua’s indiscriminate use of force against peaceful protesters, detention of hundreds of political prisoners, and repression of the media and civil society.

In addition to Nicaragua’s abuses, the government distanced itself from its international human rights obligations in the past year, expelling its UN Human Rights Office and several other international rights monitors, including missions overseen by the Organization of American States.

Representing Nicaragua at the UN session was Valdrack Jaentschke, Nicaragua’s vice minister of foreign affairs, who called Nicaragua the “safest country in Latin America” and claimed that the government guarantees the free exercise of individual freedoms.

“We have not punished any individual that operates as a human rights defender. In Nicaragua, there are no political prisoners,” he said.

Following is a selection of the praise of Nicaragua at its UNHRC review:

• Venezuela: “We commend the government for its extraordinary successes. It has overcome the attempted coup and has once again created peace.”

• Nigeria: We “commend the government for continued cooperation and engagement with human rights mechanisms.”

• Egypt: We “welcome efforts to bring about national reconciliation and dialogue to ensure that the rule of law is upheld in the country.”

• Turkey: We “appreciate efforts to improve the human rights situation in the country, where huge transformation is ongoing.”

• Syria: We “commend all human rights efforts under this presidency.”

• Myanmar: “Extends a warm welcome and welcomes efforts made.”

• Qatar: “We appreciate what Nicaragua has done.”

• Eritrea: “We appreciate seeking a solution to law and order.”

• Pakistan: We “appreciate progress made.”

• Cuba: We “congratulate the government for human rights efforts and progress achieved.”

• Algeria: We are “pleased with reforms adopted by Nicaragua.”

• Yemen: We “praise the delegation for human rights efforts.”

• Iran: “We acknowledge important achievements secured by government reconciliation and national unity, despite unlawful sanctions imposed against it.”

• Bangladesh: We note the “government’s will to ensure the safe return of Nicaraguans that had to leave the country.”

However, a minority of countries—including Switzerland, the United States, France, Finland, Iceland, and Denmark—called out the Ortega regime’s severe restrictions on individual freedoms and the alleged use of torture against those arbitrarily detained.