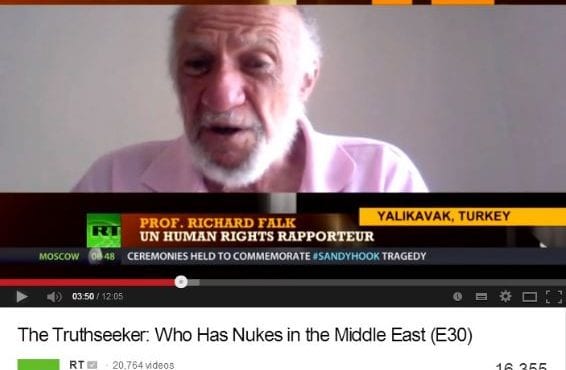 GENEVA, December 18, 2013 – UN Watch applauded Canada for being the first country to condemn Richard Falk’s latest remarks accusing Israel of “genocidal” intentions, and to call for his removal.
“Canada completely rejects and condemns the appalling remarks made by Richard Falk, United Nations Special Rapporteur for the Palestinian territories, in which he accused Israel of ‘genocidal’ intentions,” said foreign minister John Baird, in In a statement emailed today.
“Canada has previously called for Falk to be fired for his numerous outrageous and anti-Semitic statements, and these comments underscore once more the complete and total absurdity of his service as a UN Special Rapporteur,” said Baird.
“I call on the United Nations Human Rights Council—once again—to remove Falk from his position immediately,” said Baird.
“Not only do these comments undermine the fundamental values of the United Nations, they also belittle the terrible genocides that have tragically taken place throughout history and around the world.”
Top UN official Richard Falk had accused Israel of targeting Palestinians with “genocidal intent,” sparking a call yesterday by Geneva-based human rights group UN Watch for the 47 UNHRC member states to remove the controversial figure from his post—and to eliminate his “prejudicial and outdated Human Rights Council mandate.” (See below text of UN Watch letter sent to Samantha Power; click here for video of Falk’s remarks.)
UN Watch also sent a letter to UN Secretary-General Ban Ki-moon urging him to condemn Falk, but the NGO, which enjoys special consultative status at the world body, emphasized that Falk, like other Human Rights Council appointees, is directly accountable only to the U.S. and its fellow member states.
“That is why we expect the U.S. to do more than merely ask Falk to voluntarily resign, which he refuses to do,” explained UN Watch Executive Director Hillel Neuer.
“Because the U.S. has forcefully promoted the narrative that the council has been made credible, effective and authoritative, it bears a special responsibility to initiate the removal of Falk — and UN Watch has submitted a draft resolution to that effect — and the U.S. should act to eliminate the mandate itself, a permanent investigation of Israel, unchanged after 20 years, that examines the actions of only one side, and presumes guilt in advance.”

We are outraged over the remarks by Richard Falk, the UN Human Rights Council’s permanent investigator of Israel’s violations of the principles and bases of international law, which were broadcast multiple times yesterday and today by Russia Today to a global TV audience, and are now being played on the Internet.
Using his imprimatur as a top UN official, Mr. Falk made the grievously false accusation that Israel is targeting Palestinians with “genocidal” intent:

RT: “The UN’s special rapporteur on human rights warns ‘the world is slouching towards nothing less than a Palestinian Holocaust.’ Professor Richard Falk thank you very much for joining us. Why is this behavior actually genocidal?”

Professor Richard Falk, UN human rights rapporteur: “When you target a group, an ethnic group, and inflict this kind of punishment upon them, you are in effect nurturing a kind of criminal intention that is genocidal.”

(The scurrilous program is available at http://rt.com/shows/the-truthseeker/nukes-middle-east-genocide-269/.)

When Falk accuses Israel of acting with genocidal intent and perpetrating a “Holocaust,” it is only follows logically that—as he did in a recent blog post—he will also justify violence against Israelis, berating “demands by Israel that Palestinians renounce violence” while Israel “sustains a structure of occupation and oppression.”

Because Mr. Falk is accountable only to the U.S. and its fellow Council members, we trust that you will condemn Mr. Falk’s odious warrant for terrorism. UN Watch also urges you to demand that the Council remove Falk, and his unjust mandate, which, as you know, examines only one side, and prejudicially presumes guilt in advance.
Sincerely,
Hillel C. Neuer
Executive Director