Recalling General Assembly Resolution 60/251 of 15 March 2006, particularly Art. 8, which provides that the General Assembly may suspend the rights of membership in the United Nations Human Rights Council of a member that commits gross and systematic violations of human rights;
Determining that Venezuela’s Maduro regime has committed extrajudicial killings, torture, the jailing of political prisoners, acts to restrict freedom of expression and freedom of the press and political participation, violent suppression of peaceful demonstrations, and that it grants impunity for human rights abuses by state agents;
Recalling the precedent of the suspension of Libya from the Council in 2011;
We hereby call on the United Nations General Assembly to suspend the rights of membership of Venezuela’s Maduro regime in the Council.

CHAIR OF THE CAMPAIGN: Ambassador Diego Arria, former President of the United Nations Security Council and Permanent Representative of Venezuela

.@NikkiHaley: "If we are serious about being advocates of human rights, Venezuela’s membership on the Human Rights Council cannot stand. Please support @Diego_Arria in this effort. Make your voice heard."

Sign the petition to remove 🇻🇪 from the UNHRC: https://t.co/OvpyszptDJ pic.twitter.com/GMkqF7hDEs 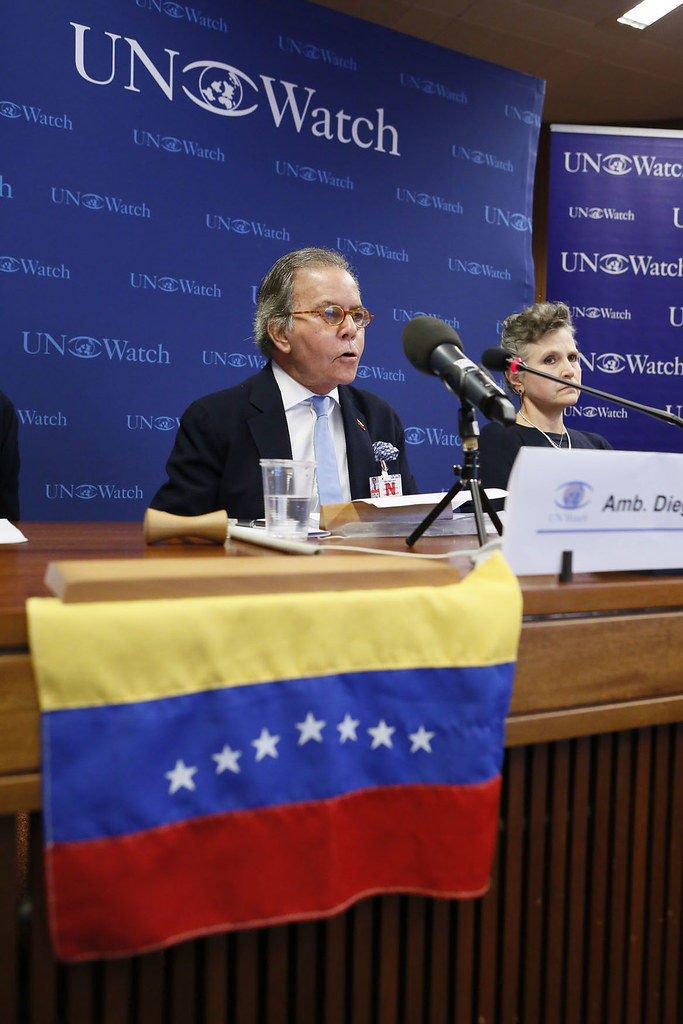 Discussion
Venezuela is an authoritarian regime ruled by President Nicolás Maduro who was reelected to a second six-year term in May 2018 in elections that were not considered to be free and fair.[1] Originally scheduled for December, the pro-government National Constituent Assembly fast-tracked the election, moving up the date so as to prevent the opposition from organizing in time. A number of opposition parties were banned from participating in the elections. In addition, major opposition figures such as Leopoldo López and Henrique Capriles were disqualified from competing.[2] The flawed elections were widely criticized by the international community. In January 2019, as Maduro commenced his second term, opposition leader Juan Guaidó, President of the National Assembly, declared himself interim-president until free and fair elections could be held.[3]
There are no independent government institutions to act as a check on Maduro’s power.[4] In the last few years, President Maduro has taken steps to erode democracy in Venezuela. After the opposition won a majority in the country’s legislature—the National Assembly—in 2015, the Maduro-controlled Supreme Tribunal of Justice repeatedly nullified legislation adopted by that body. Then, in 2017, Maduro effectively replaced the National Assembly with the National Constituent Assembly, a new body comprised of regime supporters elected through an undemocratic process.[5] The opposition boycotted the elections to this new body which were criticized as unconstitutional. The pro-Maduro National Constituent Assembly is reportedly drafting a new constitution.[6]
The government routinely targets opposition leaders, including by imprisoning them and preventing them from participating in elections. According to a UN Human Rights Council report published in July 2019, since 2016, the Venezuelan government has implemented a strategy “aimed at neutralizing, repressing and criminalizing political opponents and people critical of the Government.”[7] Opposition leader Leopoldo López spent three years in prison and is still under house arrest. In March 2018, his home was raided after the New York Times published an article based on secret interviews with López.[8]
On June 29, 2019, retired navy Captain Rafael Acosta Arévalo died on his ninth day in custody, one day after he was brought before a military tribunal in a wheel chair and unable to speak showing visible signs of torture. Prior to that appearance, he had been detained by armed men and held incommunicado for seven days.[9] High Commissioner for Human Rights Michelle Bachelet said she was shocked by the alleged torture and urged authorities to investigate the death.[10] Two opposition leaders were arrested in 2018 on suspicion of being involved in an assassination attempt on Maduro. One of them—Caracas councilman Fernando Albán—was arrested on his return from an advocacy trip to the United Nations in New York and died in custody.[11] Both are believed to have been tortured.[12]
In 2017, the government fired Attorney General Luisa Ortega Díaz who had been investigating allegations of human rights violations by government officials. She immediately fled the country fearing for her life.[13]
According to the NGO Foro Penal, as of April 2019 there were more than 900 political prisoners across Venezuela.[14] Due process violations are commonplace, including arbitrary detention for extended periods without criminal charges. Furthermore, the judiciary lacks independence, generally rules in favour of the government and is plagued by corruption.[15]
Various laws are used to stifle free speech, including the vaguely-worded Constitutional Law against Hate, for Political Coexistence and Tolerance which carries penalties of up to 20 years in prison, and a law prohibiting inaccurate reporting that disturbs the public peace.[16] Independent journalists in Venezuela suffer from intimidation, harassment, assault, and arrest. In the first three months of 2019, 39 journalists had been arbitrarily detained according to the Institute for Press and Society in Caracas.[17] In addition, since 2014, 17 people have been arrested for comments posted on social media.[18] Human rights activists also are subjected to harassments and threats.
Freedom of association is not respected. After Guaidó declared himself interim-president, Venezuelans took to the streets in a series of mass protests between January and May 2019. The government responded violently. In one week in January alone, more than 1000 people were arbitrarily detained and at least 26 people were killed.[19] According to government figures 1569 people were killed between January and May 2019 for “resistance to authority,” during government security operations.[20] Observers have called this the worst crackdown in twenty years.[21]
It follows the government’s brutal crackdown on protesters in May 2017 which resulted in 136 deaths and 1900 injured.[22] In the wake of those protests, Maduro created a special division of the criminal police to quash those participating in the protests. Between May and November 2017, this special unit committed 31% of the police killings. According to the NGO Monitor de Victimas, in the month of July 2019 alone, this unit was responsible for 57 extrajudicial killings.[23] According to Human Rights Watch, more than 12500 people have been arrested since 2014 in connection with anti-government protests, and many were prosecuted in military court in violation of international law.[24]
In addition to these violations of civil and political rights, Venezuelans are suffering from a major economic crisis characterized by mass hunger, epidemics and shortages of basic food and medicine. As of March 2018, it was estimated that 17% of children under five were suffering moderate to severe malnutrition.[25] According to the UN High Commissioner for Refugees, the number of Venezuelans leaving the country had topped four million by mid-2019.[26] The UN Office of Coordination of Humanitarian Affairs estimates that seven million Venezuelans need humanitarian assistance.[27]

Ambassador Diego Arria is a member of the International Advisory Board of United Nations Watch.

We have the honor to announce that Diego Arria, former President of the United Nations Security Council & former Ambassador of Venezuela to the U.N., is Chair of the new Global Campaign to Expel Maduro from the U.N. Human Rights Council.https://t.co/wainC4ISkQ @Diego_Arria