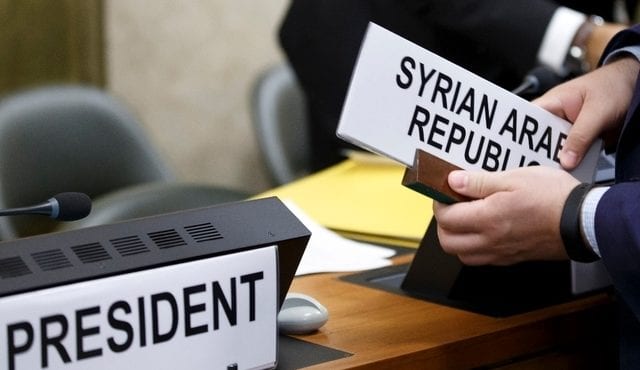 As the Assad regime took over the presidency of the UN’s top disarmament forum today, democracies clashed with the Syrian chair. Highlights below.

US: “Simply put, it’s a travesty that the Syrian regime that slaughters its people will preside over this body. We should all hold accountable the Syrian regime and those who enable their barbaric crimes. Syria has neither the credibility nor moral authority to preside over this body…. It’s interesting that the regime is concerned by the poisoning of the atmosphere [of the CD]. I am more concerned by the poisoning of the Syrian people.”

Netherlands: “Syria is the modern example of the effect of impunity.”

Japan: “Condemns in the strongest terms the use of chemical weapons in Syria.”

Spain: “The exercise of presidency by a country that seriously fails to comply is a real contradiction.”

Australia (on behalf also of Canada and Turkey): “Our governments feels strongly that the credibility of this body has been undermined.”

France: “The Syrian regime does not have moral authority or political legitimacy to exercise as president of CD.”

UK: “Syria’s continuous non compliance undermines the very principle of this conference. It is a travesty that Syria has assumed the presidency of this body.”

US: “During the next four weeks we will be present in this hall to ensure that Syria is not able to advance initiatives that run counter to the interests of the United States, but we will fundamentally alter the nature of our presence in the plenaries. The US will also not attend any informal meetings the Syrian president may decide to convene, or attend any of the CD subsidiary body discussions during Syria’s presidency.

We look forward to resuming normal participation in all CD meetings following the end of Syria’s presidency. We encourage others to join us to express their outrage on Syria’s actions and their objections to Syria’s regime presiding over the CD.

France: “To mark its disapproval, we will not be represented by our ambassador in the CD for the plenary sessions of this forum during the four weeks ahead of us.”

Canada: “To highlight the hypocrisy of the Syrian regime, throughout June we will also be giving our voice to the survivors of chemical attacks in Syria by sharing their testimonies… Since Syria’s decision to assume the rotating function of the CD presidency is unacceptable to Canada, our Permanent Representative will not participate in any plenary meetings during this presidency.”

Israel: “Israel’s seat will remain vacant, our level of representation will be lowered, [and] we will not be involved in any substantive discussion under this deplorable presidency.”

U.S. calls on Syria to ‘stand down’ from presidency of UN disarmament forum, asks Russia for help