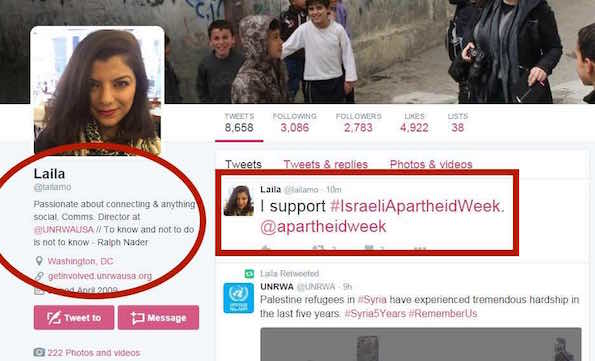 GENEVA, March 3, 2016 — UN Watch today called on America’s envoy to the UN Samantha Power to end her silence over continued anti-Israeli incitement from UNRWA as their U.S. branch’s spokeswoman Laila Mokhiber shut down her Twitter account under widespread criticism for her public endorsement of “Israeli Apartheid Week.”

“At a time when the United States is giving an astonishing $400 million a year to a UN agency that is supposed to be strictly focused on humanitarian relief, Ambassador Power and the Obama Administration must end their inexplicable policy of silence in face of what is only the latest egregious breach of neutrality by UNRWA-associated officials,” said Hillel Neuer, executive director of UN Watch, a non-governmental Geneva-based watchdog organization.

The tweet from UNRWA USA Director of Communications Laila Mokhiber came shortly after she and her colleagues met in Washington, D.C., with UNRWA commissioner-general Pierre Krähenbühl, who highlighted the significance of UNRWA’s Washington lobbying of the U.S. Congress, and hailed America’s $400 million of financial support.

“It is deeply troubling that Ambassador Power said nothing after we repeatedly sent her documentary proof of blatant incitement to terrorism by more than 30 different UNRWA teachers and officials over the last six months, and that she was silent again when she personally visited UNRWA facilities last month. U.S. silence on UNRWA incitement sends a dangerous message at a time when UNRWA-educated Palestinians are committing unprecedented amounts of stabbings and other acts of terrorism, and it has to stop immediately.”

Below: one of many social media posts by UNRWA staffers inciting terrorism which were documented in UN Watch reports sent to U.S. Ambassador Samantha Power. 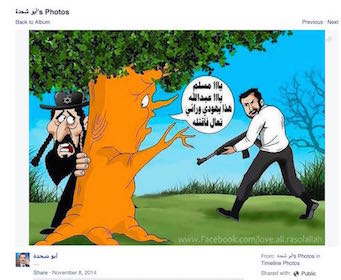