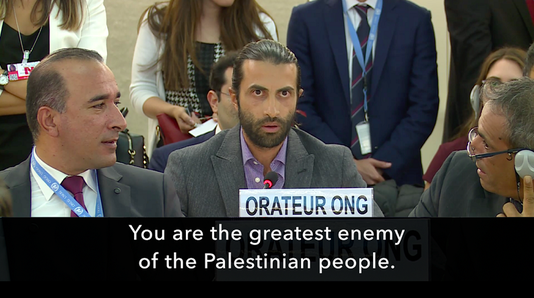 When the U.N. human rights council held a special debate last week targeting Israel — with the PLO, Syria, Iran, North Korea and dozens of other dictatorships accusing the Jewish state of “atrocities” and “apartheid” — UN Watch stunned the assembly by bringing a surprise guest speaker to deliver a response and rebuke that literally caused heads to turn in stunned disbelief, with the PLO delegates visibly in shock; see photos below.

The chamber, pretending to be concerned about “human rights in Palestine,” was completely silenced. Suddenly, the tables were turned.

Israeli Prime Minister Benjamin Netanyahu posted the UN Watch video of Yousef’s speech to his millions of Facebook followers, and declared the intervention an “extraordinary moment of truth in the U.N.”

Within only a few days, UN Watch’s video has now been viewed 2.9 million times, making it the single most-watched speech in the history of the United Nations. 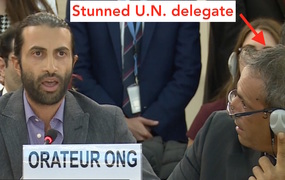 Heads turned. Eyes bulged. Then total silence. “Judged solely on their body language and facial reactions,” said one body language expert, “the Palestinian U.N. representatives are saying nothing but ‘We’re guilty!’ — absolutely guilty of what the UN Watch speaker said about them.”

UN Watch’s video of the speech has gone viral, drawing more than 3 million views on UN Watch’s Facebook, YouTube and Twitter platforms. Internet traffic to the speech was so intense that it caused UN Watch’s website to temporarily crash. The speech was shared over 100,000 times on Facebook, and ranked as the #13 trending video on YouTube.

Even Russia’s state-controlled Sputnik News admitted that Twitter was “stunned” and “all abuzz” from the Hamas founder’s son blasting the Palestinian Authority.

* Australia’s Courier Mail published an editorial on the speech that emphasized its take-away lesson: “You could hear a pin drop. Truth can have that impact. The West needs to stop pretending there is a moral equivalency. We must demand that the Palestinian Authority cease all terror, hold elections, and negotiate peace.”

* Palestinian newspaper Al Quds ran the story on its front page, saying “the Green Prince launched a scathing attack on the Palestinian Authrority.”

* The Algemeiner said the “impassioned plea” caused U.N. diplomats to be “visibly stunned.”