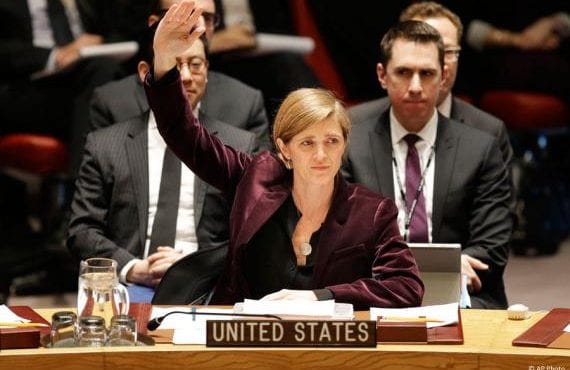 I write in response to your abstention on Friday which allowed a U.N. Security Council resolution condemning Israel, and in response to the substantial explanation of vote that you delivered. With even further U.N. measures still possible before President Obama leaves office on January 20th, I urge you and the Administration—where you play an influential role as a member of the President’s Cabinet, and as one of President Obama’s most trusted advisors—to reconsider your approach.
Your speech on Friday had much to applaud. As you have vigorously done for three years, your remarks exposed in compelling detail the U.N. double standard applied to the Jewish state, which, you rightly said, “not only hurts Israel, it undermines the legitimacy of the United Nations itself.”
As you noted last year on the 40th anniversary of the infamous Zionism is Racism resolution, at the U.N. “rarely a day goes by without some effort to delegitimize Israel.” On that occasion, you called for everyone to “relentlessly fight back” against this “ignorance and hatred.”
Your vote on Friday, however, makes a dramatic break with all of this. While it is perfectly legitimate to disagree with Israel about settlements, allowing Resolution 2334 to pass was morally wrong and strategically damaging. As set forth below, we believe the U.S. decision to acquiesce in the adoption of this lopsided resolution reverses decades of past practice, sets back the cause of peace, and harms the interests of Israelis, Palestinians, and Americans.
Leader’s of Israel’s Left-Wing Opposition Reject U.N. Resolution
Immediate and compelling evidence demonstrates that the Administration has failed to achieve its objective, which you articulated as promoting the two-state solution.
Secretary Kerry’s speech yesterday failed to acknowledge the telling fact that Israel’s mainstream society, including leading supporters of the two-state solution, have sharply rejected the U.N. resolution, and criticized the U.S. role in its advancement and adoption.
Consider:

9. U.S. Position Reneges on Commitments in 2004 Bush-Sharon Letters
By allowing the resolution’s new language enshrining “the 4 June 1967 lines,” which are the 1949 armistice lines, the U.S. position reneges on the 2004 exchange of letters negotiated between Prime Minister Ariel Sharon and President George W. Bush. The Bush letter stated: “In light of new realities on the ground, including already existing major Israeli populations centers, it is unrealistic to expect that the outcome of final status negotiations will be a full and complete return to the armistice lines of 1949, and all previous efforts to negotiate a two-state solution have reached the same conclusion.”
Prime Minister Sharon relied on the Bush commitments as part of negotiated package deal, being the consideration Israel received and relied upon in exchange for its total withdrawal from Gaza. When the U.S. ignores written commitments to allies, its international credibility is dangerously diminished. Moreover, the Bush letter severely undermines your claim that the U.S. vote on Friday was “fully in line” with prior history.
10. Resolution Lacks Legitimacy in U.S. Opinion
The resolution has been firmly rejected by the broad mainstream of American society, including by congressional leaders of President Obama’s own party:

11. Reverses Decades of U.S. Practice
There has not been a resolution like this in a generation, not since the Carter years in 1979 and 1980, and even those resolutions did not take place during a time of extreme anti-Israeli BDS campaigns and in the context of global anti-Israeli lawfare prosecutions sought in the ICC and elsewhere. This reverses decades of practice by both Democratic and Republican presidents. Moreover, unlike with the few other U.S-backed resolutions in history that criticized Israel from time to time, the nature of the coordination and the careful timing of this maneuver against a close ally make it seem particularly deliberate and hostile.
12. Joining with Venezuela & Malaysia to Condemn Israel
Whom you align with at the U.N. matters. I cannot think of another time in modern history when the U.S. endorsed a U.N. Security Council resolution co-sponsored by countries such as Venezuela, whose Maduro regime has thrown its opposition leaders in jail while causing mass starvation, and Malaysia, a hotbed of antisemitism.
Speaking of Venezuela, whose political prisoners we have championed, I have to note that while Secretary Kerry said repeatedly yesterday that the U.S. “cannot, in good conscience, do nothing, and say nothing” in regard to Israeli settlements, your Administration has said nothing every year when we have appealed to you to oppose the election of tyrannies such as Venezuela to the U.N. Human Rights Council. You said nothing to stop the Maduro regime being elected last year; you said nothing to stop Saudi Arabia, China, and Cuba from getting elected this year; and you said nothing to stop Russia getting elected in 2013. Your Administration’s policy of speaking out when good conscience requires it ought to be less selective.
Conclusion: The Obama Administration Joined the Jackals
In conclusion, I ask you to consider what one of your predecessors and role models, the late great Daniel Patrick Moynihan, might have thought about what the U.S. did on Friday.
You cited Moynihan during your confirmation hearing as an iconic American who “stood up for what was right.” And as an example of how to bring the U.N. to live up to its ideals, you have invoked the moral clarity that Moynihan eloquently expressed in his formidable speeches as U.S. ambassador to the U.N. in 1975.
We certainly know what Moynihan thought about the Carter Administration’s similar votes against Israel in 1979 and 1980. In his iconic 1981 Commentary essay, “Joining the Jackals,” Moynihan diagnosed the confused ideas which led U.S. delegates and officials to abandon Israel to what the Washington Post editorial board had identified as the pack at the U.N. which hounds Israel shamelessly. Carter, the Post had said, had decided to “join the jackals.”
I believe Moynihan’s observations of 36 years ago are no less apt to the resolution which you just allowed last week:

Were Moynihan alive today, do you have any doubt that he would have said that on Friday the U.S.—after 36 years—once again joined the jackals?
What we don’t know yet is the degree to which the U.S., directly or indirectly, may have actually orchestrated the maneuver. If that proves to be the case—and based on my knowledge and experience of U.N. diplomacy, your Mission had to have played a key role in influencing the language, as well as the timing, of this infamous resolution—would not Moynihan say that the U.S. this time didn’t just join the jackals, but became leader of the pack?
Thank you for your consideration.
Sincerely,
Hillel C.  Neuer
Executive Director
UN Watch
Geneva, Switzerland