Philippe Val, author, journalist, and former Charlie Hebdo editor, addressed the Rally for Equal Rights at the United Nations on March 18, 2019. Below is the English translation of his remarks. His original French speech can be heard in the video above. For links to other speakers’ quotes, videos and photos, click here.

Good morning, friends; good morning, all.
I see an Italian flag there, and I’m going to make this short because there are a lot of speakers. I feel a deep dislike for the current Italian government; I believe I share that dislike with a great many European citizens. I think Italy is flirting with disaster.
Despite my disdain for the government, I continue to feel great love for my Italian friends, and for Italy herself, which, like all states that observe the rule of law, is like a second homeland for me. Nowhere do I hear talk of anti-Italianism; nowhere do I hear it said that Italy must be wiped off the map.
So, when it comes to Israel, obviously, one can criticize the policy of the Israeli government, but one also hears talk of wiping Israel off the map. This reflects a bias that shows how unwise we were to have put up so long with the term anti-Zionism, which was clearly a form of anti-Semitism, just as anti-Italianism would be a form of racism. I now believe that, all doubt having been removed, anti-Zionism is modern jargon that stands in for anti-Semitism.
The state of Israel is threatened on its borders; it is menaced by most terrorist organisations. It has a duty to protect its citizens. That cannot be forgotten. And now I would like to say that there are two types of votes to condemn Israel within the UN organization: there are votes by dictatorships and votes by states governed by the rule of law.
What do the votes and condemnations of the dictatorships reveal? These dictatorships, which are unable to run their own countries properly, which prefer corruption and personal enrichment over progress for their people, over building hospitals, over working for the public good, enrich themselves.
To be able to continue to exert their dictatorship, they rely on tricks that are as old as humanity: they find a common enemy that they can all hate, and Israel fills the bill. Israel is appointed to serve as an alibi, to create cohesion among the dictatorships, as well as popular cohesion, cohesion among people who have been duped and robbed by their leaders.
And I would like to say one thing very quickly, which is that as long as hatred for Israel is exploited by the leaders of these countries, Muslim countries will enjoy neither progress, justice, prosperity, or freedom. Anti-Semitism is the trap in which their dictators confine them. That’s what is revealed by the votes from the dictatorships.
Now, what is revealed when democracies condemn Israel at the UN? Most of the condemnations come from countries with large numbers of citizens of Muslim origin. And the politicians and shapers of opinion, acting out of demagogy and electoral calculation, are seeking to capture the votes of these Muslim-origin populations, whom they assume hate Israel.
They are unconcerned about the fairness of their condemnations of Israel, and even less so about living up to the ethical foundations of the United Nations. Such condemnations are political acts taken for domestic consumption—demagogy pure and simple.
The combination of these two betrayals—dictatorships betraying their people and democratic politicians betraying their voters—the confluence of these two betrayals has consequences that are very serious indeed. Simply put, the two types of condemnation are a catalyst for anti-Semitism.
The UN, set up after World War II to preserve peace among nations, is in the process of reigniting one of the major pieces of propaganda that triggered that tragic war—namely, anti-Semitism.
The struggle against anti-Semitism is a question of life or death for all states ruled by laws. That is why we will fight to end; that is why we will never surrender; and that is why we will prevail.
Thank you. 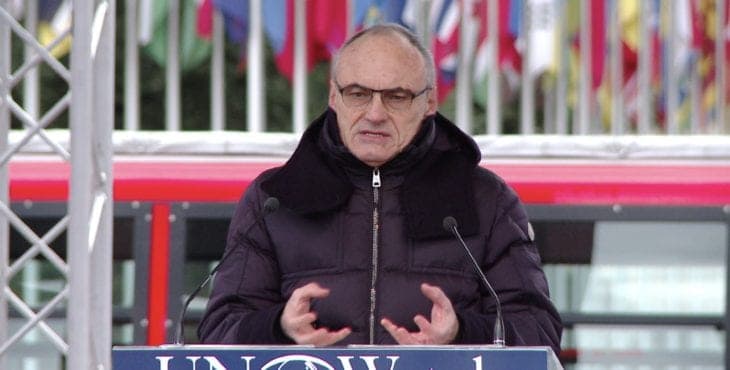