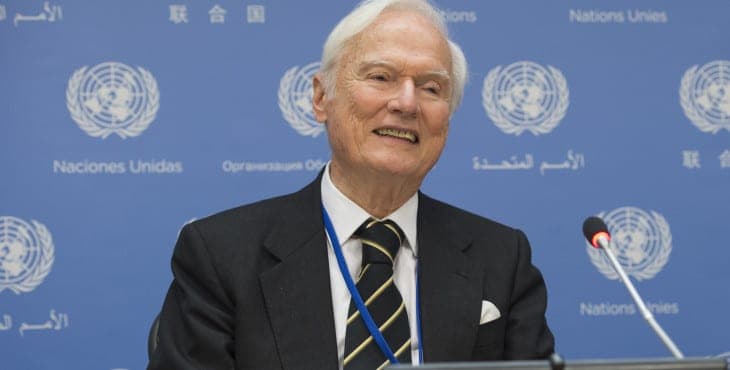 Mr. Idriss Jazairy, the UN’s “Special Rapporteur on the negative impact of unilateral coercive measures on the enjoyment of human rights.”

Above: BBC Persian asked UN expert Idriss Jazairy about the $50,000 from Russia

GENEVA, Sept. 14, 2017 – After an investigator of the U.N. human rights council presented a report slamming the U.S. and EU for imposing sanctions on Russia, which he said amounted to “unilateral coercive measures,” a Geneva-based watchdog group took the floor to challenge the Special Rapporteur, former Algerian ambassador Idriss Jazairy, on the ethics of his receiving $50,000 from Russia last year for his mandate, as disclosed in a recent UN report. (See intervention below.)

The U.N. report “makes the astounding claim that the Russian government of Vladimir Putin is a victim of human rights violations, and that the perpetrators are the EU and the U.S.,” said Hillel Neuer, executive director of UN Watch, a non-governmental human rights group.

Russia’s delegate said “the sole authority to introduce sanctions should be the UN Security Council.” Sanctions had been imposed “following the legitimate right of the citizens of Crimea to exercise their right to self-determination.”

Venezuela, Cuba and China are members of the 47-nation council, and have been able to influence the appointment of experts friendly to their regimes.

UN Watch expressed concern over a “fixed” panel discussion this afternoon on Western sanctions against human rights abusers. The panel includes Jazairy and two other experts installed by Cuba—Qaddafi Prize co-founder Jean Ziegler, and Alfred de Zayas, a hero to Holocaust deniers—along with the Venezuelan ambassador, and a pro-Russian Belarus academic. The event is chaired by the Egyptian ambassador.

Mr. Jazairy, thank you for coming today to answer questions about your report on Russia.

Human rights activists worked hard to see the U.S. Congress enact the Magnitzky Act, which uses sanctions to hold Russian officials to account, for their role in the false imprisonment and death of Sergei Magnitzky, the courageous whistleblower against corruption.

Mr. Jazairy, I am confused, therefore, that you have submitted a report which, in its essence, makes the astounding claim that the Russian government of Vladimir Putin is a victim — that the Kremlin is a victim of human rights violations, and that the perpetrators are the EU and the U.S.

Mr. Jazairy, I am further confused that you wrote an entire report touching on Russia’s occupation of Ukraine, but yet you never mention the words occupied territory. While you say, at note 1, that you followed the language of Resolution 71/205, we take this opportunity to remind all UN experts that, in fact, this resolution makes explicit reference to “the Russian occupation authorities” and “Condemns the temporary occupation of part of the territory of Ukraine.”

Mr. Jazairy, I have one other issue, and it is a serious one. I was reading Council report 34/34/Add.1, and under the list entitled “External support received by mandate holders,” you are listed on page 37 as receiving, over the past year, the sum of $50,000 — from Russia.

Mr. Jazairy, could you please clarify for us:

(a) Did you receive the Russian funds before or after you wrote this report, in which you describe Russia as a human rights victim?

(b) Have you considered the ethical implications, and the appearance, of a UN expert receiving money — $50,000 — from just one country, and then visiting only that country, to write a report warmly embraced by that government, as we just heard?

Finally, on 11 August, you said sanctions on Venezuelan officials would “worsen the situation,” and you spoke of the lack of food and medicine. But why did you not mention that it was the Venezuelan government’s catastrophic policies that caused these shortages in the first place?

[Mr. Jazairy responded to say he would not react to “disparaging attacks.”]