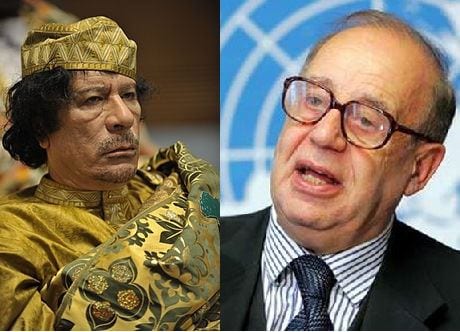 GENEVA, Aug. 13 – Switzerland has nominated the founding spokesman of the “Muammar Qaddafi Human Rights Prize” for a position on the United Nations Human Rights Council, a move already drawing sharp controversy.
Jean Ziegler, who was exposed by Swiss media in 2011 for covering up his role in the Qaddafi prize organization, is expected to elected at the Council’s September session, for a spot on its advisory committee. The former UN official was rejected for a similar position in 2012.
Swiss MP and sociology professor Pierre Weiss has filed an objection against Ziegler with Swiss Foreign Minister Didier Burkhalter and Swiss President Ueli Maurer. Swiss journalist Françoise Buffat, former political affairs editor of the Journal de Genève, has also expressed opposition to the nomination.
UN Watch, a Geneva-based non-governmental advocacy organization, sent a detailed letter to all UN missions refuting the Swiss government’s nomination letter. See full text below.
“While Muammar Qaddafi was raping women and girls across Libya—as documented by new revelations—Jean Ziegler was busy promoting the Libyan dictator as a hero of human rights,” said Hillel Neuer, executive director of UN Watch. “Why is Switzerland, which claims to respect human rights, now reviving this scoundrel’s moribund UN career?”
___________
UN Watch Email to UN Ambassadors
August 12, 2013
Excellency,
UN Watch is a non-governmental human rights organization accredited to the United Nations with Special Consultative Status.
We write in response to the attached Note Verbale in which Switzerland requests your support for the nomination of Mr. Jean Ziegler to the UN Human Rights Council. UN Watch urges you to strongly oppose this candidature, and to ask Switzerland to withdraw the nomination.
We deeply regret that the Note Verbale in support of Mr. Ziegler’s election to the UNHRC Advisory Committee was incomplete, inaccurate and misleading.
To correct the record, we have the honour to present below an annotated version—with the original text in bold—providing missing and material facts, with links to sources.
UN Watch believes that a review of Mr. Ziegler’s record establishes his clear failure to satisfy the official criteria of expertise in human rights, high moral standing, and impartiality.
Thank you for your consideration.
Sincerely,
Hillel C. Neuer
Executive Director
UN Watch
Geneva