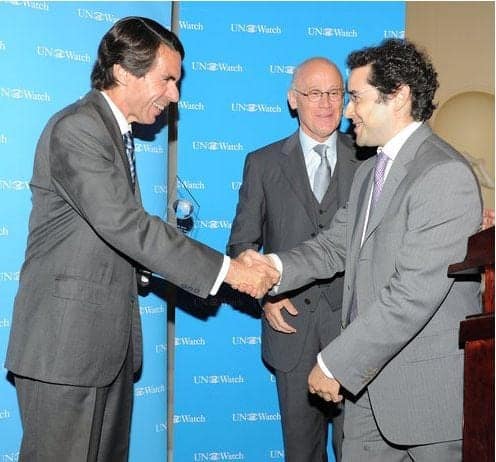 U.S. Ambassador Betty King, the Obama administration’s representative in Geneva, delivered greetings, along with her colleague from Israel, Ambassador Aharon Leshno-Yaar. Also in attendance were Ambassador Javier Garrigues of Spain, current holder of the EU presidency at the UN Human Rights Council, as well as Rwandan Ambassador Venetia Sebudandi.

Mr. Aznar, who headed Spain’s government from 1996 to 2004, was awarded UN Watch’s Guardian of Freedom Award “for his leadership and courage in defending liberty, confronting tyranny and terror, as a champion of democracies united and strong.”

In his remarks, Mr. Aznar highlighted the threat posed by the Iranian regime to global security, saying “their pursuit of a nuclear weapon is not acceptable.”

While agreeing that “all diplomatic means must be explored in order to avoid conflict,” Mr. Aznar said that “doing the same over and over again while expecting a different outcome is proving rather ineffective. A psychiatrist may call it delusion. This is not the perfect state of mind when dealing with the brutal regime of the ayatollahs.”

“A nuclear bomb in the hands of the ayatollahs poses a threat not only to Israel but to the stability of the whole world. Our friends and allies from Israel are the first ones endangered by Iran’s nuclear ambitions, but not the only ones. We should not forget that Iranian missiles can already reach the heart of Europe.”  (Click here for full text.) 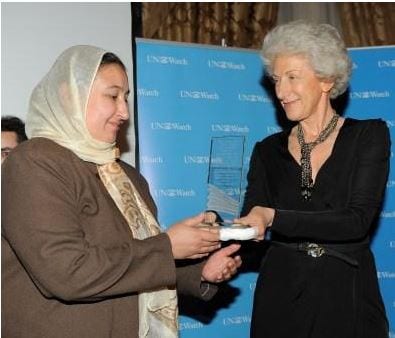 Dr. Massouda Jalal, the first woman in Afghanistan to run for presidential office and to later serve as its Minister for Women’s Affairs, was given UN Watch’s Morris B. Abram Human Rights Award, a prize named after the late founder of UN Watch, whose advocacy in the civil rights movement was noted during the dinner by U.S. Ambassador King.

The UN Watch award was dedicated to Dr. Jalal for her “courage and dedication in fighting discrimination against women in Afghanistan. You give hope to your nation, inspire women worldwide, and are a hero for the cause of equal rights for all.”
Her personal story as a presidential candidate was documented in the 2004 film, “Front Runner.” (See film trailer here.)

Today, Dr. Jalal heads a women’s rights organization in Kabul that provides training and resources to women and girls in the areas of nutrition, education, job skills training and domestic violence.

“It is not the sole responsibility of the international community or the UN to ensure our freedom. But how can it be that under their watch, we women, and many men too, have seen their freedoms eroded so substantially?” asked Dr. Jalal.

As part of the award, over the next year UN Watch will promote and assist the human rights work of Dr. Jalal, which it has already begun to do by arranging high-level meetings for her with officials in Geneva and Ottawa. Dr. Jalal will visit Canada soon to testify before its parliament.

Last year’s recipients of UN Watch human rights awards were Esther Mujawayo, an activist for victims of the genocide in Rwanda, and Nazanin Afshin-Jam, the founder and president of Stop Child Executions.