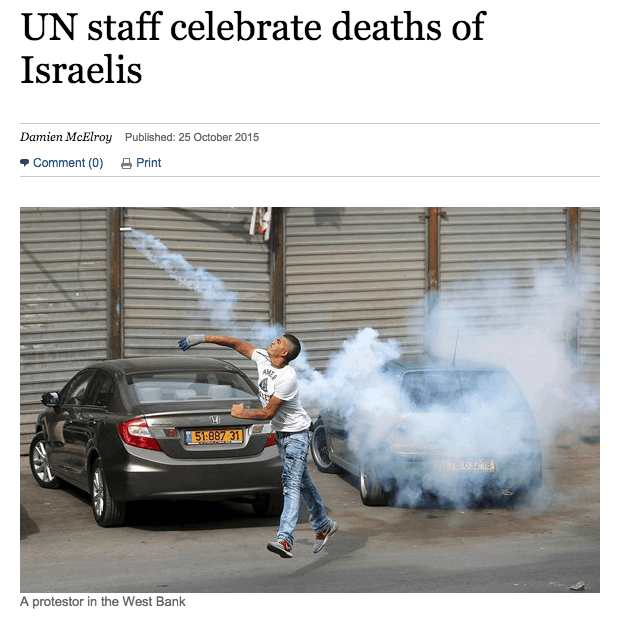 SUNDAY TIMES
25 October 2015
BY Damien McElroy
A UN agency that runs schools and social services for Palestinians is facing calls to sack employees using social media to celebrate attacks on Israelis.
Facebook posts by UN staff have included photographs showing blood- drenched knives held by Palestinian men and women in keffiyeh scarves, throwing stones at Israel’s defence forces.
Almost two dozen UN employees have been exposed for publishing their support for a recent bout of stabbing attacks by Palestinians that targeted Israelis.
UN Watch, a Geneva-based watchdog, has called on the body, United Nations relief and works agency (Unrwa), to dismiss those who have posted the hate-filled messages.
Hillel Neuer, the director of UN Watch, said incitement to hatred, particularly by teachers, would only contribute to violence in the Middle East. He called on the UN to demonstrate that it would not turn a blind eye to racism among its staff.
“Governments that fund Unrwa would not tolerate this behaviour,” he said. “We have submitted screen shots of postings by 22 individuals, including by teachers, advocating the stabbing of Jews, and we don’t know what action is being taken against them.”
The UN conceded last week that some of those on its payroll had faced disciplinary action for violating the organisation’s rules on social media.
However, it also added that more than 90 “imposter Facebook pages” had been wrongly attributed to its staff by critics.
There are no figures for the number of staff involved in disciplinary action or the type of punishments meted out.
Christopher Gunness, a spokesman for Unwra, said one account identified by Neuer was attributed to a school in Syria that no longer existed and the former staff were no longer on the UN payroll.
“The school in question, because of the war, had long ceased to be an Unrwa school. It was that specific story that I called out as false,” Gunness told The Sunday Times.
“I am in no way defending staff who are found . . . to have violated neutrality rules. We are taking these allegations seriously and staff who are found to violate UN neutrality will be reprimanded.”
A total of 10 Israelis have been murdered in stabbing attacks and 49 Palestinians have been killed by Israeli fire, including 27 said to be attackers. One suspected attacker was shot dead yesterday by the Israeli military at a Jerusalem checkpoint.
John Kerry, the US secretary of state, met Mahmoud Abbas, the Palestinian leader, and Jordan’s King Abdullah II yesterday as part of attempts to defuse the crisis.
Kerry secured backing for new rules on access to the Temple Mount, the holy site for Muslims and Jews at the heart of the crisis.
US congressional sources said the State Department had cut $80m (£52m) from its $370m economic grant to the Palestinian Authority to send a message that incitement could not be condoned.
PrevPreviousOutrage: Venezuela, Pakistan, UAE, Ethiopia, Burundi Slated to Win UN Rights Council Seats
NextIssue 553: UN Watch in Today's Sunday Times: “UN Staff Celebrate Deaths of Israelis”Next