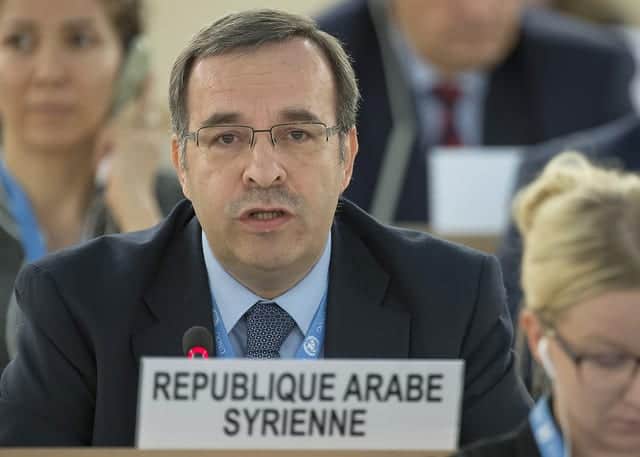 Above: Syrian Ambassador Hussam Edin Aala, whose recent presidency
of the UN Conference on Disarmament provoked a global outcry.

Syria was reviewed today in Geneva by the UN Committee on the Rights of the Child. Below is an excerpt of the exchange.

UN Committee on the Rights of the Child (Mr. Benyam Dawit Mezmur): It sounds like you’re attributing every abuse to forces outside of the Syrian government. Yet the Commission of Inquiry, based on testimonies from first-hand accounts, video and satellite photos, show otherwise. In the last 8 years, is there one example that the government has identified, in the context of children in armed conflict, that is attributable to the government itself?


Syrian Ambassador Hussam Edin Aala: The problem in the reports that are submitted on Syria relate to a systematic aim of political act of misinformation. The aim is to accuse the Syrian government of the responsibility of what’s happening on Syrian grounds. These are illogical.

We are in a war against terrorism for the last 8 years. Without comprehensive support and popular support to the state of Syria, it would not have been able to stand. Therefore, trying to say that Syria purposefully targets its citizens is politically motivated.

The reports, we have provided written answers to all of them. We submitted 57 reports regarding OCHA to the Security Council. I personally gave responses to what you said before the Human Rights Council. You can refer to the responses we submitted.

We want to clarify that this commission of inquiry was established by HRC resolution, therefore there was an internal division regarding the mandate. There are many problems related to the methodology of work.

There’s a fact that show that the sponsor states are the same states implicated in the war against my country. These states are actually dictating the commission — its acts, and the content of its reports. They are micromanaging the work of this commission. We did not cooperate with it [in light of this]. Although we welcomed its chairperson at an early stage, but he wanted to continue a biased approach against Syria.

U.S. calls on Syria to ‘stand down’ from presidency of UN disarmament forum, asks Russia for help