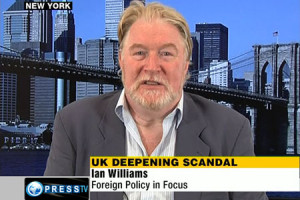 How is it that the Assad regime, led by father and son, was able to retain the international legitimacy needed to retain power over 42 years, despite perpetrating systematic brutality, such as the killing of an estimated 20,000 citizens of Hama in February 1982, and being listed as a leading state sponsor of terrorism?

A key factor was that the world body mandated to hold such criminal regimes to account — the United Nations — turned a blind eye to Syrian murder, massacre and terror.

Prior to last year’s Arab Spring, during the decades that Mideast dictators were strong, neither the U.N.’s General Assembly or its Human Rights Council ever passed a single resolution on Hama — or on any other barbaric Syrian human rights violation.

Worst of all, in October 2001, the U.N. voted overwhelmingly to elect Syria to the Security Council, no doubt acting, as required by the U.N. Charter, out of due regard specially paid to Syria’s contribution “to the maintenance of international peace and security” and “to the other purposes of the Organization.”

One of the figures on the international stage shilling loudest for Bashar al-Assad’s election to the U.N. Security Council was Ian Williams of The Guardian, a long-time contributor to the Washington Report, a publication known for consistently opposing action for victims of Libya, Syria, Iran, Saudi Arabia and other Middle East dictatorships.

Writing a few months before the U.N. vote, Williams’s role in the well-circulated Washington report was to bolster Bashar al-Assad’s chances of victory by pressuring U.S. State Department officials to drop any idea of opposing Syria’s bid — which is exactly what American diplomats did last year, successfully, to keep Assad off the Human Rights Council.

Using the same methods as the Assads themselves, Williams reframed the discussion away from Syria’s despicable record by pointing at the Israeli bogeyman. It worked: Syria was elected by a huge majority of 160 out of 177 votes.

The massive vote to the prestigious position empowered the Assad regime. According to the BBC, Syria interpreted its election as a sign of international support. “The wide support for Syria constitutes a referendum and a clear message that these allegations [of Syrian support for terrorism] are void and false,” boasted Damascus. “I’m proud for this great success,” said the Syrian Ambassador to the UN, Mikhail Wehbe. “Syria will pray to preserve the peace and security in the world.”

Now is the time to ask: If the lobbying of Ian Williams — who makes sure to portray himself objectively as the former head of the UN Correspondents Association and not as a pro-Assad contributor to a pro-regime publication, or as a regular on Iran’s Press TV propaganda channel — had been rejected, and if instead the Syrian regime’s brutality had been exposed and Assad stripped of international legitimacy, would he still be in power and murdering his own citizens today?

By Ian Williams
When Israeli politicians get a bee in their bonnet, the buzzing usually can be heard loudly around the domes of Capitol Hill. The credibility of this Israeli administration, however, must leave something to be desired—or perhaps the Knesset’s angry froth has subsided in the face of reality. For, regardless of Israel’s campaign to discredit Syria, Damascus is pretty much assured of a place in the Security Council next year.

The Council’s temporary seats are allocated according to regional groups. Because the Arab states straddle Asia and Africa they have a complex rotation system which ensures that candidate states usually are elected unopposed. To block the election, Israel and the U.S. would have had to find another Asian Arab state prepared to contest the seat. Amazingly enough, none of them is rushing to fulfill Israeli whims.

Previous attempts to derail—as in the case of Libya, for example—were successful because, on the one hand, there were official U.N. sanctions against Tripoli and, on the other hand, Muammar Qaddafi had become a thorn in the side of his Arab neighbors. Neither situation applies to Syria, which now has good relations even with its former archenemy, Iraq.

Israeli accusations about Syria being a “terrorist” state will carry little weight in the international community, coming as they do from a country whose cabinet has just blithely sat down and publicly authorized the assassination of several dozen Palestinian leaders and officials—not to mention a country that itself is in defiance of so many U.N. resolutions! So far, the State Department seems wisely to have resisted any urgings to launch a campaign against the Syrian candidacy that would so surely fail. Arab unity is often almost an oxymoron, but in this case, at least, it should hold the line.