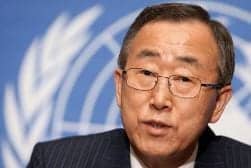 In a letter sent to Mr. Ban yesterday (see below), the Geneva-based non-governmental monitoring group UN Watch called on the UN secretary-general and US Ambassador Susan Rice to rebuke Richard Falk, the UN Human Rights Council’s Palestine monitor, over his April 21st article justifying the Boston atrocities. Several other groups and journals have expressed outrage.
“Richard Falk is an independent expert,” said UN spokesman Farhan Haq. “The Secretary-General did not appoint him and is not responsible for his views, which he has criticized in the past. Mr Falk reports to the Human Rights Council, which is comprised of different member states.” Haq’s comment came in reply to a question by David Bedein, Director of the Center for Near East Policy Research.

UN Watch said it was confused and disappointed by the UN chief’s silence.

“The secretary-general rightly rebuked Falk in the past for promoting the 9/11 conspiracy on his personal blog, and the outrage this time is far more substantial, offensive and repugnant,” said UN Watch executive director Hillel Neuer.

“We indeed urge all UN Human Rights Council member states to condemn Falk, and we have appealed to US Ambassador Rice in particular, but Mr. Ban should use his moral pulpit to show leadership in the world body.”

Neuer said Ban’s own strong denunciation of the Boston bombings threatened to be undermined by Falk’s remarks.

“We cannot help but notice how when a marginal and unheard-of figure in America, a nobody, burned a Quran, Ban Ki-moon condemned him, as did other UN officials. The world was in an uproar and American officialdom, from generals to presidents, proclaimed a thousand denunciations.”

“Yet here we have a UN-appointed human rights figure — whom the UN itself describes as a ‘top UN official’ — blatantly justifying terrorism, insulting the memory of Boston’s dead and wounded, insulting the American people, desecrating the founding values of the UN, and there is complete silence, no one is willing to take any responsibility,” said Neuer. “It’s shameful.”

UN Watch has led a 5-year campaign calling for the removal of Falk, who was recently expelled by the Human Rights Watch organization. For more on Falk, click here.

Via Fax
22 April 2013
Dear Mr. Secretary-General,
We write to express our outrage over yesterday’s statement by Richard Falk—a top official of the United Nations Human Rights Council—in which he justifies the Boston terrorist attacks as due “retribution” for American sins, warns of “worse blowbacks” unless America changes its foreign policy, blames “Tel Aviv” and exploits a moment of tragedy and mourning to advance a disturbing political agenda.
We urge you to condemn Mr. Falk, the UNHRC’s permanent investigator of Israel’s violations of the bases and principles of international law, for his affront to the memory of those who were killed last week, to the injured, and to the people of Boston. His remarks are a violation of your own policy that UN experts live up to the highest standards, which you set forth two years ago when you admirably rebuked Mr. Falk for spreading 9/11 conspiracy theories on his blog.
Falk’s Foreign Policy Journal article entitled “A Commentary on the Marathon Murders,” dated April 21, 2013, and annexed here, makes three ignominious points.
First, its thesis is that Americais to blame for last week’s atrocity. Falk approvingly cites comments justifying the Boston Marathon bombings as “retribution” for the actions of the U.S.military in Afghanistan,IraqandPakistan. “The American global domination project,” says Falk, bears responsibility for provoking “all kinds of resistance” in the post-colonial world. He calls for “courage” to “connect some of these dots.” Crystallizing his justification of the terrorist attacks, he writes: “Those to whom evil is done, do evil in return.”
Terrorism will target Americans until they reflect upon and change their action, says Falk. Lamenting a “taboo” on “self-scrutiny,” he predicts “adjustments” that will come either from “a voluntary process of self-reflection” or “through the force of unpleasant events.” America’s “military prowess” and “hard power diplomacy” make the country “a menace to the world and to itself.”
“How many canaries will have to die,” asks Falk, “before we awaken from our geopolitical fantasy of global domination?”
Second, Falk conjures up the sinister specter of another global menace by blaming the Boston bombings on the Jewish state: “[A]s long as Tel Aviv has the compliant ear of the American political establishment those who wish for peace and justice in the world should not rest easy.”
President Obama is accused of having delivered “a love letter to the Israeli public” during his recent trip there, and of practicing “obsequious diplomacy.” Falk predicts “worse blowbacks” if the U.S.does not change its Middle East policy.
Third, the essay alludes to the same 9/11 conspiracy theories that caused you and other world leaders to condemn him in 2011. Falk speaks of “holy war fevers espoused by national leaders, the media, and a vengeful public after the 9/11 attacks” which “embraced Islamophobic falsehoods.” This was exploited by Bush White House officials “openly seeking a pretext to launch a regime-changing war against Saddam Hussein’s Iraq.” According to Falk, “[T]he 9/11 events, as interpreted and spun, provided just the supportive domestic climate needed for launching an aggressive war against the Baghdad regime.”
Excellency, Mr. Falk’s odious and preposterous remarks insult last week’s victims and discredit the cause of human rights and the founding principles of the United Nations. We urge you to speak out.
Sincerely,
Hillel C. Neuer
Executive Director

US Government Condemns "Provocative and Offensive" Remarks by UN Human Rights Official on Boston Bombings
US slams UN rights official for "offensive" remarks on Boston bombings, calls for him to go